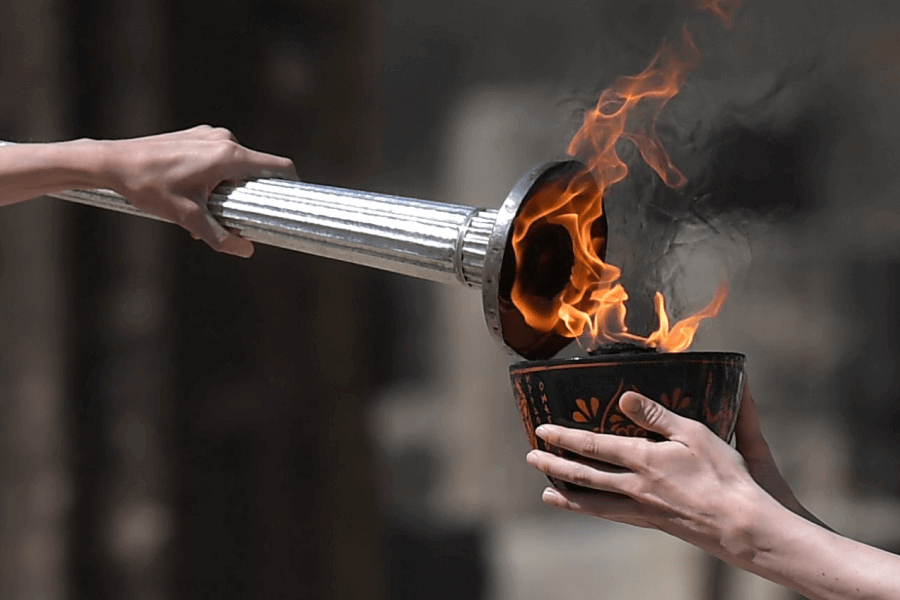 The Olympic Torch
Since 776 B.C., when the Greek people held their first-ever Olympic Games, the Games were hosted every four years at the Olympia city. Back then, a long journey for the Olympic torch was made before the opening ceremony of each Olympic Games. The Greek people would light a cauldron of flames on the altar, a ritual devoted to Hera, the Greek Goddess of birth and marriage. The reintroduction of flame to the Olympics occurred at the Amsterdam 1928 Games, for which a cauldron was lit yet without a torch relay. The 1936 Berlin Summer Games held the first Olympic torch relay, which was not resumed in the Winter Olympics until in 1952. However, in that year the torch was lit not in Olympia, Greece, but in Norway, which was considered as the birthplace of skiing. Until the Innsbruck 1964 Winter Olympics in Austria, the Olympic flame was reignited at Olympia. The torch is originally an abstract concept of a designer or groups of designers. A couple of design groups hand in their drafts to the Olympic Committee in the hope that they would get the chance to create the torch. The group that wins the competition will come up with a design for a torch that has both aesthetic and practical value. After the torch is completed, it has to succeed in going through all sorts of severe weather conditions. The appearance of the modem Olympic torch is attributed to a Disney artist John Hench, who designed the torch for the 1960 Winter Olympics in Squaw Valley, California. His design laid a solid foundation for all the torches in the future. The long trip to the Olympic area is not completed by one single torch, but by thousands of them, so the torch has to be replicated many times. Approximately 10,000 to 15,000 torches are built to fit thousands of runners who take the torches through every section of the Olympic relay. Every single runner can choose to buy his or her torch as a treasurable souvenir when he or she finishes his or her part of the relay. The first torch in the modem Olympics (the 1936 Berlin Games) was made from a slender steel rod with a circular platform at the top and a circular hole in the middle to jet flames. The name of the runner was also inscribed on the platform as a token of thanks. In the earlier days, torches used everything from gunpowder to olive oil as fuels. Some torches adopted a combination of hexamine and naphthalene with a flammable fluid. However, these materials weren’t exactly the ideal fuel sources, and they could be quite hazardous sometimes. In the 1956 Olympics, the torch in the final relay was ignited by magnesium and aluminium, but some flaming pieces fell off and seared the runner’s arms. To promote the security rate, liquid fuels made its first appearance at the 1972 Munich Games. Since then, torches have been using fuels which are pressurised into the form of a liquid. When the fuels are burnt, they turn into gas to produce a flame. Liquid fuel becomes safer for the runner and can be stored in a light container. The torch at the 1996 Atlanta Summer Olympics is equipped with an aluminium base that accommodates a tiny fuel tank. As the fuel ascends through the modified handle, it is squeezed through a brass valve that has thousands of little openings. As the fuel passes through the tiny openings, it accumulates pressure. Once it makes its way through the openings, the pressure decreases and the liquid becomes gas so it can bum up. The torch in 1996 was fuelled by propylene, a type of substance that could give out a bright flame. However, since propylene was loaded with carbon, it would produce plenty of smoke which was detrimental to the environment. In 2000, the designers of the Sydney Olympic torch proposed a lighter and cheaper design, which was harmless to the environment. For the fuel, they decided to go with a combination of 35 per cent propane (a gas that is used for cooking and heating) and 65 per cent butane (a gas that is obtained from petroleum), thus creating a powerful flame without generating much smoke. Both the 1996 and 2000 torches adopted a double flame burning system, enabling the flames to stay lit even in severe weather conditions. The exterior flame bums at a slower rate and at a lower temperature. It can be perceived easily with its big orange flame, but it is unstable. On the other hand, the interior flame bums faster and hotter, generating a small blue flame with great stability, due to the internal site offering protection of it from the wind. Accordingly, the interior flame would serve as a pilot light, which could relight the external flame if it should go out. As for the torch of 2002 Olympics in Salt Lake City, the top section was made of glass in which the flame burned, for the purpose of echoing the theme of ‘Light the Fire Within’ of that Olympics. This torch was of great significance for the following designs of the torches.

Question 1 - 3
Complete the summary below.
Choose NO MORE THAN THREE WORDS from the passage for each answer.
The Olympic torch, as requested by the Olympic Committee, will be carefully designed so that it is capable of withstanding all kinds of
1
﻿. Generally, the design of the modern Olympic torch enjoys the
2
﻿ value.  The torch must be copied, and thousands of torches are constructed to accommodate thousands of runners who will carry them through each leg of the Olympic relay. Each runner has an opportunity to purchase the torch as a(n)
3
﻿ at the end of his or her leg of the relay.
Question 4 - 9
Look at the following statements and the list of Olympic torches below.
Match each statement with the correct Olympic torch, A-H.
List of Findings
A
ancient Greek Olympic flames
B
Berlin Games torch (1936)
C
1952 Winter Games flame
D
1956 Games torch
E
Munich Games torch (1972)
F
1996 torch (Atlanta)
G
2000 torch (Sydney)
H
2002 torch (Salt Lake City)
4
first liquid fuel
5
not environmentally friendly
6
beginning to record the runners’ name
7
potentially risky as it burnt the runner’s arms
8
special for a theme of ‘Light’
9
not lit in Greek
Question 10 - 14
Label the diagram below. Choose NO MORE THAN THREE WORDS from the passage for each answer. 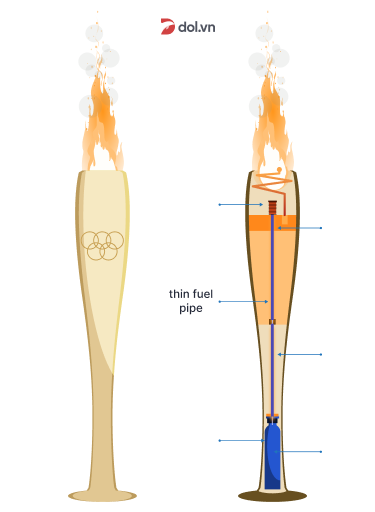