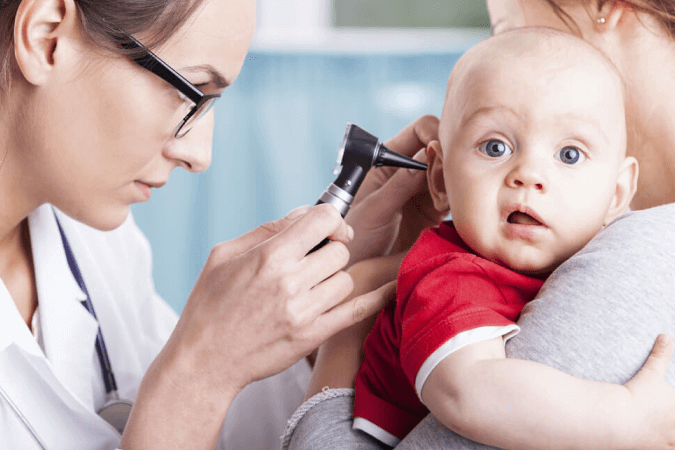 Children with auditory problems
A
A. Hearing impairment or other auditory function deficit in young children can have a major impact on their development of speech and communication, resulting in a detrimental effect on their ability to learn at school. This is likely to have major consequences for the individual and the population as a whole. The New Zealand Ministry of Health has found from research carried out over two decades that 6-10% of children in that country are affected by hearing loss.
B
B. A preliminary study in New Zealand has shown that classroom noise presents a major concern for teachers and pupils. Modern teaching practices, the organisation of desks in the classroom, poor classroom acoustics, and mechanical means of ventilation such as air conditioning units all contribute to the number of children unable to comprehend the teacher's voice. Education researchers Nelson and Soli have also suggested that recent trends in learning often involve collaborative interaction of multiple minds and tools as much as individual possession of information. This all amounts to heightened activity and noise levels, which have the potential to be particularly serious for children experiencing auditory function deficit. Noise in classrooms can only exacerbate their difficulty in comprehending and processing verbal communication with other children and instructions from the teacher.
C
C. Children with auditory function deficit are potentially failing to learn to their maximum potential because of noise levels generated in classrooms. The effects of noise on the ability of children to learn effectively in typical classroom environments are now the subject of increasing concern. The International Institute of Noise Control Engineering (I INCE), on the advice of the World Health Organization, has established an international working party, which includes New Zealand, to evaluate noise and reverberation control for school rooms.
D
D. While the detrimental effects of noise in classroom situations are not limited to children experiencing disability, those with a disability that affects their processing of speech and verbal communication could be extremely vulnerable. The auditory function deficits in question include hearing impairment, autistic spectrum disorders (ASD) and attention deficit disorders (ADD/ADHD).
E
E. Autism is considered a neurological and genetic life-long disorder that causes discrepancies in the way information is processed. This disorder is characterised by interlinking problems with social imagination, social communication and social interaction. According to Janzen, this affects the ability to understand and relate in typical ways to people, understand events and objects in the environment, and understand or respond to sensory stimuli. Autism does not allow learning or thinking in the same ways as in children who are developing normally. Autistic spectrum disorders often result in major difficulties in comprehending verbal information and speech processing. Those experiencing these disorders often find sounds such as crowd noise and the noise generated by machinery painful and distressing. This is difficult to scientifically quantify as such extra-sensory stimuli vary greatly from one autistic individual to another. But a child who finds any type of noise in their classroom or learning space intrusive is likely to be adversely affected in their ability to process information.
F
F. The attention deficit disorders are indicative of neurological and genetic disorders and are characterised by difficulties with sustaining attention, effort and persistence, organisation skills and disinhibition. Children experiencing these disorders find it difficult to screen out unimportant information, and focus on everything in the environment rather than attending to a single activity. Background noise in the classroom becomes a major distraction, which can affect their ability to concentrate.
G
G. Children experiencing an auditory function deficit can often find speech and communication very difficult to isolate and process when set against high levels of background noise. These levels come from outside activities that penetrate the classroom structure, from teaching activities, and other noise generated inside, which can be exacerbated by room reverberation. Strategies are needed to obtain the optimum classroom construction and perhaps a change in classroom culture and methods of teaching. In particular, the effects of noisy classrooms and activities on those experiencing disabilities in the form of auditory function deficit need thorough investigation. It is probable that many undiagnosed children exist in the education system with 'invisible' disabilities. Their needs are less likely to be met than those of children with known disabilities.
H
H. The New Zealand Government has developed a New Zealand Disability Strategy and has embarked on a wide-ranging consultation process. The strategy recognises that people experiencing disability face significant barriers in achieving a full quality of life in areas such as attitude, education, employment and access to services. Objective 3 of the New Zealand Disability Strategy is to 'Provide the Best Education for Disabled People' by improving education so that all children, youth learners and adult learners will have equal opportunities to learn and develop within their already existing local school. For a successful education, the learning environment is vitally significant, so any effort to improve this is likely to be of great benefit to all children, but especially to those with auditory function disabilities.
I
I. A number of countries are already in the process of formulating their own standards for the control and reduction of classroom noise. New Zealand will probably follow their example. The literature to date on noise in school rooms appears to focus on the effects on schoolchildren in general, their teachers and the hearing impaired. Only limited attention appears to have been given to those students experiencing the other disabilities involving auditory function deficit. It is imperative that the needs of these children are taken into account in the setting of appropriate international standards to be promulgated in future.

Question 1 - 6
Reading Passage has nine sections, A-I.
Which section contains the following information?
Write the correct letter, A-I
1
an account of a national policy initiative
2
a description of a global team effort
3
a hypothesis as to one reason behind the growth in classroom noise
4
a demand for suitable worldwide regulations
5
a list of medical conditions which place some children more at risk from noise than others
6
the estimated proportion of children in New Zealand with auditory problems
Question 7 - 10
Answer the questions below.
Choose NO MORE THAN TWO WORDS AND/OR A NUMBER from the passage for each answer.
7
For what period of time has hearing loss in schoolchildren been studied in New Zealand?
8
In addition to machinery noise, what other type of noise can upset children with autism?
9
What term is used to describe the hearing problems of schoolchildren which have not been diagnosed?
10
What part of the New Zealand Disability Strategy aims to give schoolchildren equal opportunity?
Question 11 - 12
Choose TWO letters, A-F.
The list below includes factors contributing to classroom noise. Which TWO are mentioned by the writer of the passage?
A
current teaching methods
B
echoing corridors
C
cooling systems
D
large class sizes
E
loud-voiced teachers
F
playground games
Question 13
Choose appropriate options A, B, C or D.
13
What is the writer’s overall purpose in writing this article?
A
to compare different methods of dealing with auditory problems
B
to provide solutions for overly noisy learning environments
C
to increase awareness of the situation of children with auditory problems
D
to promote New Zealand as a model for other countries to follow

﻿ The New Zealand Ministry of Health﻿﻿ has found from﻿ research﻿ carried out over two decades﻿ that 6-10% of children﻿ in that country﻿ are affected﻿﻿ by hearing loss﻿ .

→ Those experiencing these disorders find sounds such as crowd noise painful

So sánh với keywords trong câu hỏi: the hearing problems, schoolchildren which have not been diagnosed

﻿ Objective 3 of the New Zealand Disability Strategy﻿   is﻿ to” Provide the Best  Education for Disabled People‟﻿   by... ﻿

﻿ Modern teaching practices﻿﻿ , the organization of desks﻿ in the classroom﻿ , poor classroom acoustics﻿﻿ , and mechanical means of ventilation﻿ such as﻿ air conditioning units﻿ all contribute to﻿ the number of children unable to comprehend the teacher's voice﻿ ﻿

﻿ Modern teaching practices﻿ , the organization of desks in the classroom , poor classroom acoustics , and mechanical means of ventilation such as air conditioning units all contribute to number of children unable to comprehend the teacher's voice ﻿

Paragraph A: the writer argues that: Hearing impairment or other auditory function deficit in young children can have a  major impact on their development of speech and communication, resulting in a detrimental effect on their ability to learn at school. This is likely to have major consequences for the individual and the population as a whole