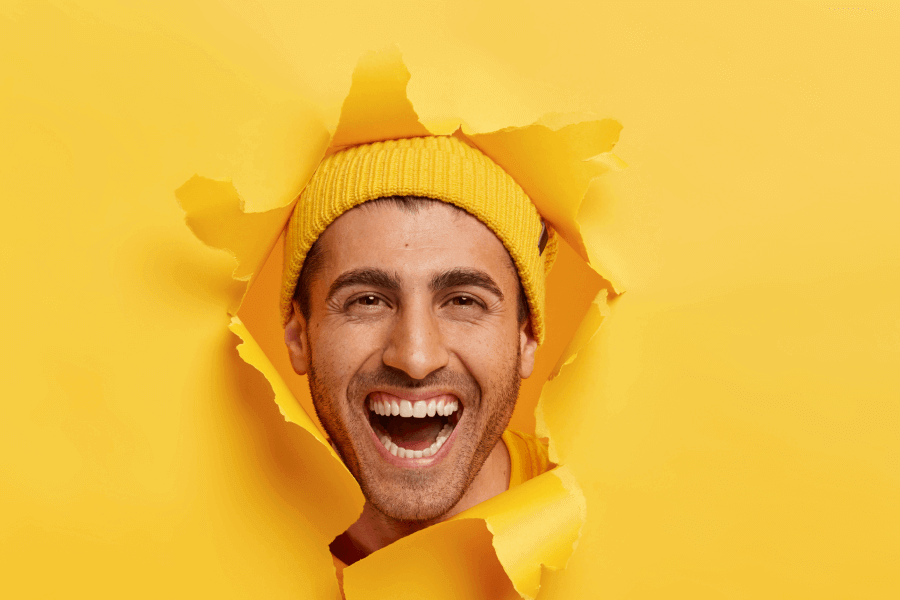 Question 1 - 10
Complete the notes below.
Write NO MORE THAN THREE WORDS for each answer.
Laughter
The nature of laughter
Reasons for laughter
Benefits of laughter

Good afternoon, everybody .. and in our second talk on social psychology i want to look at the role of laughter in our lives - something that usually gets everyone smiling from the start.
So first of all, I'll start by looking at the actual nature of laughter. Well, when someone laughs you've got movement of the muscles of the face and the chest, and you've got sound formed when the air’s forced out of the body as part of this process, so we’re talking about a physical activity.
But obviously other things are involved as well and this is where it gets more complicated. Laughing isn’t something that you normally decide to do. so it’s not voluntary behaviour, like ordinary speech. Instead it’s regulated by our instincts rather like the singing of a bird, or the roaring of a lion.
And once you start to laugh, it can be quite hard to stop that's not always under your conscious control either.
But why do we laugh? Because we find something funny, most of us would say. But in fact it appears that laughter has little to do with jokes or funny stories only about 10 percent of laughter is caused by things like that.
One suggestion is that human laughter may have originally started out as a shared response to signal relief at the passing of danger. And it's true that even these days, laughter’s rarely an activity carried out by an individual on his or her own.
In fact, people are 30 times more likely to laugh when they're with other people than when they're completely alone. Laughter still seems to be a kind of social signal, it occurs when people are in a group and they're comfortable with one another And it seems likely that laughter can result in the creation of bonds between the people in the group.
And it's precisely because of this social aspect of laughter that people like public speakers and politicians often try to get their audience to laugh it encourages their listeners to trust them and to connect with them.
But this kind of thing - controlling the laughter of a group, that is indicates that there's a link between laughter and power, and this is supported by several studies that indicate that bosses use humour more than their employees.
And research has also shown that female listeners are likely to laugh much more if the speaker is male, so it appears that there are gender issues associated with how much we laugh
I should also point out that laughter can he used as a negative signal as well as a positive one. I think we've all probably seen evidence of a group using laughter to exclude someone ... to emphasise that they are not accepted.
So it's not always a positive type of behaviour, either. So what all this goes to show is that laughter is a very, very complex issue.
It does appear however that laughter has definite benefits. If we look first at the psychological aspects, we know that people often tend to store negative emotions, such as anger, sadness and fear, rather than expressing them, and il seems that laughter provides a harmless way for the release of those emotions.
But there are also clear physical effects that have been monitored too. For example, laughter is good aerobic exercise - it speeds up heart rate and respiration, and raises blood pressure; one researcher suggests that 100 laughs a day is the equivalent of 10 minutes' jogging.
Laughter also helps prevent the stress that so many people suffer from today, which results from the faster pace of life and all that goes with il It does this by reducing the levels of hormones in the blood which are caused by stress.
And, in addition, it is known to increase the levels of chemicals that protect the body from infection or pain and so it helps to boost the immune system. One interesting study showed that people who had had surgical operations asked for fewer pain killers if they'd been viewing comic films.
In fact, research has even shown that the quality of dreams can be positively affected by laughter - a good laugh 10 minutes before going to sleep can prevent you from having bad dreams and give a much more pleasant and restorative night's sleep, So. there's now little argument that finding things funny and enjoying a good laugh is extremely beneficial to us all.
What we need to consider now are the ways in which laughter can be used as a treatment for people who...