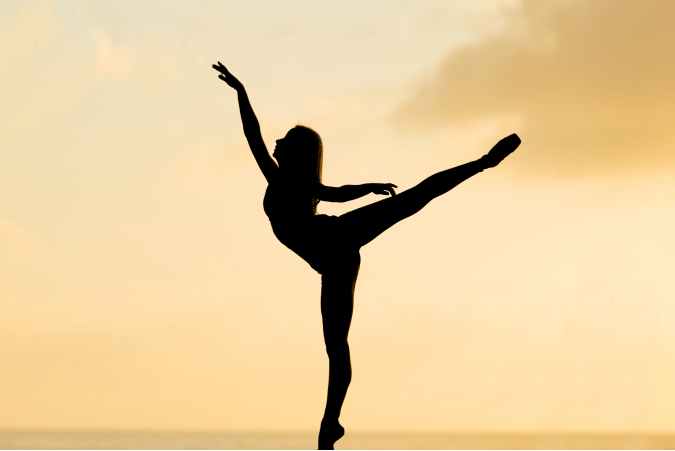 00:00
Question 1 - 10
Complete the notes below.
Write ONE WORD ONLY for each answer.
Health benefits of dance
Recent findings:
- All forms of dance produce various hormones associated with feelings of happiness.
- Dancing with others has a more positive impact than dancing alone.
- An experiment on university students suggested that dance increases
1
.
- For those with mental illness, dance could be used as a form of
2
.
﻿
Benefits of dance for older people:
- accessible for people with low levels of
3
.
- reduces the risk of heart disease
- better
4
reduces the risk of accidents
- improves
5
function by making it work faster
- improves participants' general well-being
- gives people more
6
to take exercise
- can lessen the feeling of
7
, very common in older people
﻿
Benefits of Zumba:
- A study at The University of Wisconsin showed that doing Zumba for 40 minutes uses up as many
8
as other quite intense forms of exercise.
- The American Journal of Health Behavior study showed that:
- women suffering from
9
benefited from doing Zumba.
- Zumba became a
10
for the participants.

00:00
Dancing is something that humans do when they want to have a good time.
It's a universal response to music, found in all cultures.
But what's only been discovered recently is that dancing not only makes us feel good, it's also extremely good for our health.
Dancing, like other forms of exercise, releases hormones, such as dopamine, which make us feel relaxed and happy.
And it also reduces feelings of stress or anxiety.
Dancing is also a sociable activity, which is another reason it makes us feel good.
One study compared people's enjoyment of dancing at home in front of a video with dancing in a group in a studio.
The people dancing in a group reported feeling happier, whereas those dancing alone did not.
In another experiment, university researchers at York and Sheffield took a group of students and sent each of them into a lab where music was played for five minutes.
Each had to choose from three options: to sit and listen quietly to the music, to cycle on an exercise bike while they listened, or to get up and dance.
All were given cognitive tasks to perform before and after.
The result showed that those who chose to dance showed much more creativity when doing problem-solving tasks.
Doctor Lovatt at the University of Hertfordshire believes dance could be a very useful way to help people suffering from mental health problems.
He thinks dance should be prescribed as therapy to help people overcome issues such as depression.
It's well established that dance is a good way of encouraging adolescent girls to take exercise but what about older people?
Studies have shown that there are enormous benefits for people in their sixties and beyond.
One of the great things about dance is that there are no barriers to participation.
Anyone can have a go, even those whose standard of fitness is quite low.
Dance can be especially beneficial for older adults who can't run or do more intense workouts, or for those who don't want to.
One 2015 study found that even a gentle dance workout helps to promote a healthy heart.
And there's plenty of evidence which suggests that dancing lowers the risk of falls, which could result in a broken hip, for example, by helping people to improve their balance.
There are some less obvious benefits of dance for older people too.
One thing I hadn't realised before researching this topic was that dance isn't just a physical challenge.
It also requires a lot of concentration because you need to remember different steps and routines.
For older people, this kind of activity is especially important because it forces their brain to process things more quickly and to retain more information.
Current research also shows that dance promotes a general sense of well-being in older participants, which can last up to a week after a class.
Participants report feeling less tired and having greater motivation to be more active and do daily activities such as gardening or walking to the shops or a park.
Ballroom or country dancing, both popular with older people, have to be done in groups.
They require collaboration and often involve touching a dance partner, all of which encourages interaction on the dance floor.
This helps to develop new relationships and can reduce older people's sense of isolation, which is a huge problem in many countries.
I also looked at the benefits of Zumba.
Fifteen million people in 180 countries now regularly take a Zumba class, an aerobic workout based on Latin American dance moves.
John Porcari, a professor of exercise and sport science at the University of Wisconsin, analysed a group of women who were Zumba regulars and found that a class lasting 40 minutes burns about 370 calories.
This is similar to moderately intense exercises like step aerobics or kickboxing.
A study in the American Journal of Health Behavior showed that when women with obesity did Zumba three times a week for 16 weeks, they lost an average of 1.2 kilos and lowered their percentage of body fat by 1%. More importantly, the women enjoyed the class so much that they made it a habit and continued to attend classes at least once a week - very unusual for an aerobic exercise programme.
Dance is never going to compete with high-intensity workouts when it comes to physical fitness gains, but its popularity is likely to keep on rising because it's such a fun way to keep fit.

Nghe tới In another experiment, university researchers at York and Sheffield took a group of students

Nghe tới benefits for people in their sixties and beyond

Nghe thấy Anyone can have a go, even those whose standard of fitness is quite low
Xem full giải thích
4
balance
Mở rộng

Nghe thấy dancing lowers the risk of falls, which could result in a broken hip, for example, by helping people to improve their balance
Xem full giải thích
5
brain
Mở rộng

Nghe thấy This helps to develop new relationships and can reduce older people's sense of isolation, which is a huge problem in many countries

Nghe thấy when women with obesity did Zumba three times a week for 16 weeks, they lost an average of 1.2 kilos and lowered their percentage of body fat by 1%