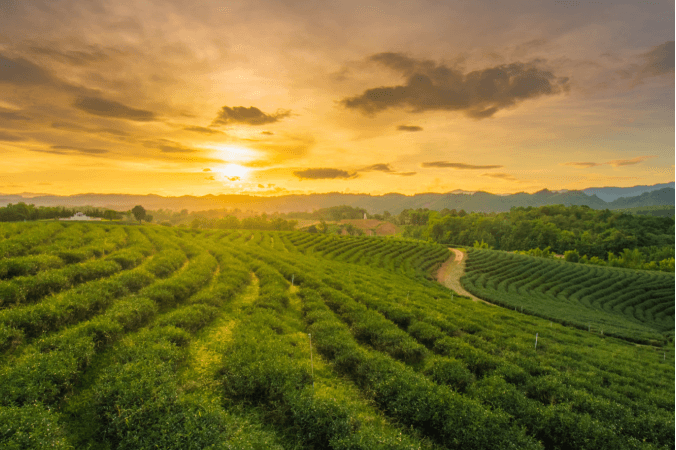 Question 1 - 4
Choose TWO letters A-E.
Which TWO things make the museum unusual?
A
the guides
B
the events
C
the animals
D
the buildings
E
the objects
Which TWO things can visitors do at the museum?
A
buy home-made bread
B
ride a horse
C
ride on a tram
D
buy copies of original posters
E
go down a coal mine
Question 5 - 10
Label the map below.
Write the correct letter, A-I next to questions. 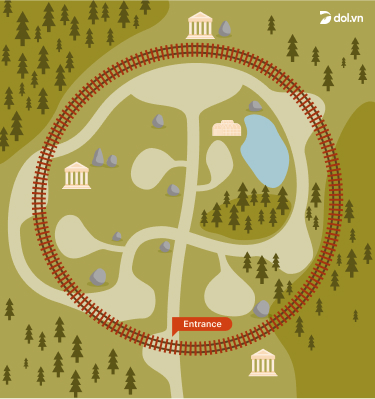 Welcome to Brampton Museum. I’m going to tell you a little bit about the museum first and then show you around. As you can see, Brampton is an open–air museum. The first open-air museums were established in Scandinavia towards the end of the 19th century, and the concept soon spread throughout Europe and North America and there are several in Britain, all of which tell the history of a particular part of the country.
Brampton focuses on life during the 19th century. The site was chosen because there were already some historic 19th-century buildings here and others have been dismantled in different parts of the region and rebuilt on the site. This hadn’t been attempted before in these parts so we’re very proud of what we have here. All the buildings are filled with furniture, machinery and objects. You may be able to see these in other museums but not in their original settings.
What also sets Brampton apart from other museums is that the story of the exhibits is told not by labels but by costumed staff like myself. I look after sheep, cows and hens, which are much the same as those you see on modern farms, but I use traditional methods to care for them. You will also be able to see a blacksmith and a printer, as well as other craftspeople.
If you talk to them, you’ll be able to find out what life was really like 150 years ago. Our programme of activities during the year has guided walks, an agricultural fair and all the other events you would expect a museum to have, but remember: here you experience them in the real surroundings.
The site is divided into different areas. The main building contains our High Street which is a street of 19th-century shops, offices and some homes. There’s a stationer’s shop which sells a range of specially selected cards, prints and copies of Victorian stationery, all available for purchase by visitors. Upstairs in the same building, a printer demonstrates the production of posters, business cards and advertising material.
Across the street from the stationer’s is a clothes shop and there’s a baker’s where you can watch a demonstration of someone making bread, cakes and pastries. We also have a sweet shop which has old–fashioned sweets for sale. Vintage trams travel along from one end of the street to the other, carrying visitors on their journey into the past.
We will also be visiting the farm and taking a ride on a steam train. Of course, the main form of transport in those days was the horse and you can watch horses being exercised in the old stables.
This part of Britain was famous for coal–mining and on the site we have part of a mine which opened in 1860 and was worked for over a hundred years, before closing in 1963. Visitors can put on a hard hat and take a guided tour underground to see how coal was worked and to experience the working conditions in the early 1900s.
Now if you’d like to look at your map, we’ll begin our tour. The site is a bit like a circle with the railway going around the edge. You can see where we are now by the entrance and we’re going to start by walking to the High Street.
We’ll go to the crossroads in the middle of the map and go straight on, making our way between two buildings on either side of the oath. The larger one is the exhibition centre but it’s not open today, unfortunately. The other building is the offices. The path leads directly to the High Street building which is at the opposite side of the site to the entrance.
Here you’re free to wander around and take a ride up and down on a tram. We’ll then take the path which follows the railway line and crosses it to the farm. If you wish, you can have tea in the farmhouse and there’ll be time to look at the animals and the machinery.
Then, we cross the railway line again and visit our special attraction which is the coal mine. It’s just in front of us here at the entrance. We’ll return to the crossroads and walk through a small wooded area to the Manor House.
This is one of the original buildings on the site and belonged to a wealthy farmer. You can look round the house and gardens and talk to our guides who can tell you what it was like to live there. We will then follow a path which goes past the pond and will take us to the Railway Station, which is situated between the path and the railway line.
Finally, we’ll take the steam train back around the site, passing alongside the High Street and the Coal Mine back to the entrance. So if you’d like to follow me…

﻿ Nghe thấy ",,,there were already some historic 19th-century buildings here and others have been dismantled in different parts of the region and rebuilt on the site "

﻿ Nghe tiếp thấy nhắc tới furniture, machinery, and objects Speaker nói là "you may be able to see these in other museums"