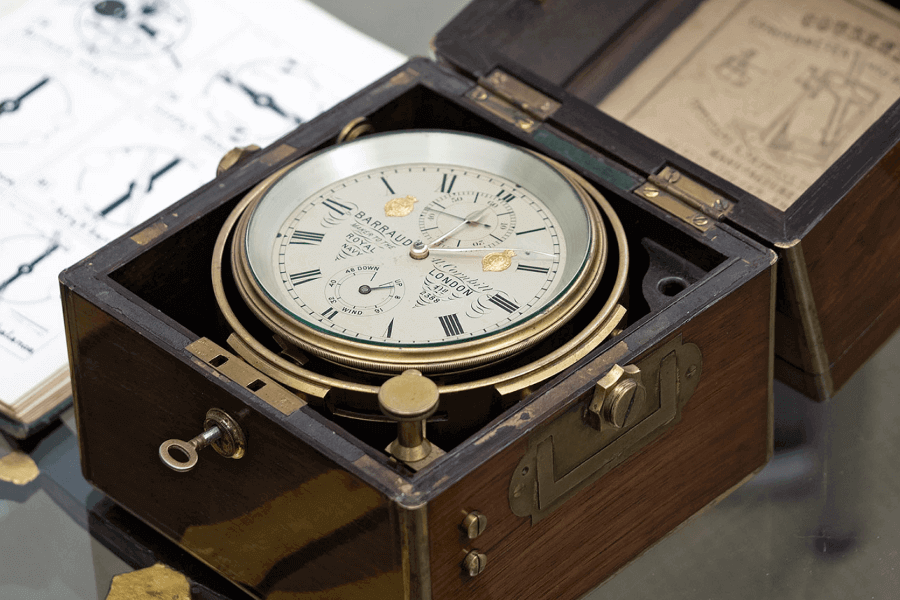 Timekeeper: Invention of Marine Chronometer
A
A. Up to the middle of the 18th century, the navigators were still unable to exactly identify the position at sea, so they might face a great number of risks such as the shipwreck or running out of supplies before arriving at the destination. Knowing one’s position on the earth requires two simple but essential coordinates, one of which is the longitude.
B
B. The longitude is a term that can be used to measure the distance that one has covered from one’s home to another place around the world without the limitations of naturally occurring baseline like the equator. To determine longitude, navigators had no choice but to measure the angle with the naval sextant between Moon centre and a specific star— lunar distance—along with the height of both heavenly bodies. Together with the nautical almanac, Greenwich Mean Time (GMT) was determined, which could be adopted to calculate longitude because one hour in GMT means 15-degree longitude. Unfortunately, this approach laid great reliance on the weather conditions, which brought great inconvenience to the crew members. Therefore, another method was proposed, that is, the time difference between the home time and the local time served for the measurement. Theoretically, knowing the longitude position was quite simple, even for the people in the middle of the sea with no land in sight. The key element for calculating the distance travelled was to know, at the very moment, the accurate home time. But the greatest problem is: how can a sailor know the home time at sea?
C
C. The simple and again obvious answer is that one takes an accurate clock with him, which he sets to the home time before leaving. A comparison with the local time (easily identified by checking the position of the Sun) would indicate the time difference between the home time and the local time, and thus the distance from home was obtained. The truth was that nobody in the 18th century had ever managed to create a clock that could endure the violent shaking of a ship and the fluctuating temperature while still maintaining the accuracy of time for navigation.
D
D. After 1714, as an attempt to find a solution to the problem, the British government offered a tremendous amount of £20,000, which were to be managed by the magnificently named ‘Board of Longitude’. If timekeeper was the answer (and there could be other proposed solutions, since the money wasn’t only offered for timekeeper), then the error of the required timekeeping for achieving this goal needed to be within 2.8 seconds a day, which was considered impossible for any clock or watch at sea, even when they were in their finest conditions.
E
E. This award, worth about £2 million today, inspired the self-taught Yorkshire carpenter John Harrison to attempt a design for a practical marine clock. In the later stage of his early career, he worked alongside his younger brother James. The first big project of theirs was to build a turret clock for the stables at Brockelsby Park, which was revolutionary because it required no lubrication. Harrison designed a marine clock in 1730, and he travelled to London in seek of financial aid. He explained his ideas to Edmond Halley, the Astronomer Royal, who then introduced him to George Graham, Britain’s first-class clockmaker. Graham provided him with financial aid for his early-stage work on sea clocks. It took Harrison five years to build Harrison Number One or HI. Later, he sought the improvement from alternate design and produced H4 with the giant clock appearance. Remarkable as it was, the Board of Longitude wouldn’t grant him the prize for some time until it was adequately satisfied.
F
F. Harrison had a principal contestant for the tempting prize at that time, an English mathematician called John Hadley, who developed the sextant. The sextant is the tool that people adopt to measure angles, such as the one between the Sun and the horizon, for a calculation of the location of ships or planes. In addition, his invention is significant since it can help determine longitude.
G
G. Most chronometer forerunners of that particular generation were English, but that doesn’t mean every achievement was made by them. One wonderful figure in the history is the Lancastrian Thomas Earnshaw, who created the ultimate form of chronometer escapement—the spring detent escapement—and made the final decision on format and productions system for the marine chronometer, which turns it into a genuine modern commercial product, as well as a safe and pragmatic way of navigation at sea over the next century and half.

Question 1 - 5
Reading Passage 1 has seven paragraphs, A-G.
Which paragraph contains the following information?
NB You may use any letter more than once.
1
a description of Harrison’s background
2
problems caused by poor ocean navigation
3
the person who gave financial support to Harrison
4
an analysis of the long-term importance of sea clock invention
5
the practical usage of longitude
Question 6 - 8
Do the following statements agree with the information given in the Reading Passage?
YES if the statement agrees with the information
NO if the statement contradicts the information
NOT GIVEN if it is impossible to say what the writer thinks about this
6
In theory, sailors can easily calculate their longitude position at sea.
7
To determine longitude, the measurement of the distance from the Moon to the given star is a must.
8
Greenwich Mean Time was set up by the English navigators.
Question 9 - 14
Complete the sentences below. Choose NO MORE THAN TWO WORDS AND/OR A NUMBER from the passage for each answer.
9
Sailors were able to use the position of the Sun to calculate
﻿
.
10
An invention that could win the competition would lose no more than
﻿
every day.
11
John and James Harrison’s clock worked accurately without
﻿
.
12
Harrison’s main competitor’s invention was known as
﻿
.
13
Hadley’s instrument can use
﻿
to make a calculation of location of ships or planes.
14
The modem version of Harrison’s invention is called
﻿
.

﻿ Knowing the longitude position﻿ was﻿ quite simple﻿ , even for the people﻿ in the middle of the sea ﻿

﻿ Greenwich Mean Time (GMT)﻿ was determined , which﻿ could be adopted to calculate longitude﻿ because﻿ one hour in GMT﻿ means﻿ ﻿ 15-degree longitude. ﻿

=> local time is identified by checking the position of the Sun

﻿ The first big project of theirs﻿ was﻿ to build﻿ a turret clock + it required no lubrication﻿ .

Lancastrian Thomas Earnshaw made﻿ the final decision on format and productions system for﻿ the marine chronometer﻿﻿ , which ﻿ turns it into a genuine modem commercial product﻿