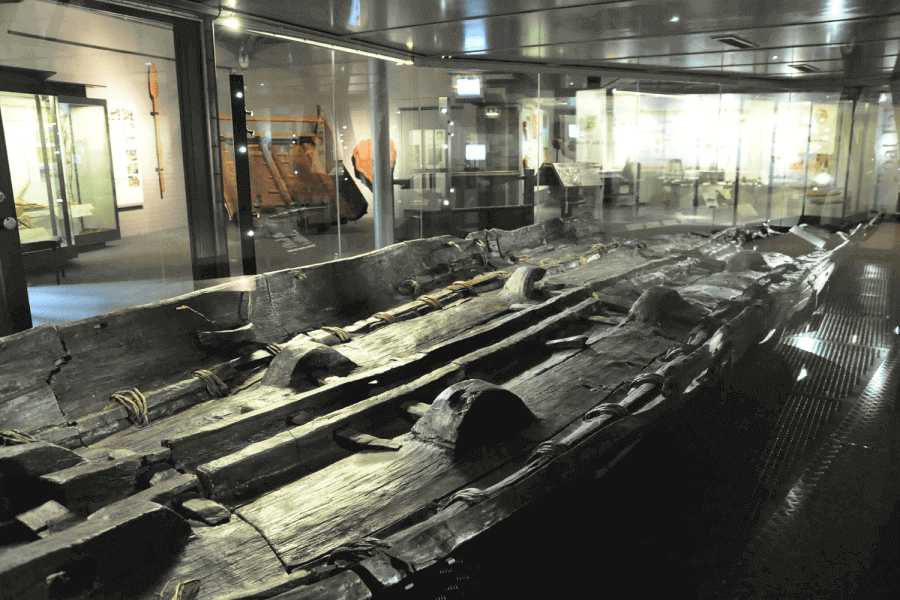 The Dover Bronze Age Boat
A beautifully preserved boat, made around 3,000 years ago and discovered by chance in a muddy hole, has had a profound impact on archaeological research.
It was 1992. In England, workmen were building a new road through the heart of Dover, to connect the ancient port and the Channel Tunnel, which, when it opened just two years later, was to be the first land link between Britain and Europe for over 10,000 years. A small team from the Canterbury Archaeological Trust(CAT) worked alongside the workmen, recording new discoveries bought to light by the machines. At the base of the deep shaft six meters below the modern streets a wooden structure was revealed. Cleaning away the waterlogged site overlying the timbers, archaeologists realized its true nature. They had found a prehistoric boat, reserved by the type of sediment in which it was buried. It was then named by Dover Bronze Age Boat. About nine meters of the boat’s length was recovered; one end lay beyond the excavation and had to be left. What survived consisted essentially of four intricately carved oak planks: two on the bottom, joined along a central seam by a complicated system of wedges and stitched to the others. The seams had been made watertight by pads of moss, fixed by wedges and yew stitches. The timbers that closed the recovered end of the boat had been removed in antiquity when it was abandoned, but much about its original shape could be deduced. There was also evidence for missing upper side planks. The boat was not a wreck, but had been deliberately discarded, dismantled and broken. Perhaps it had been “ritually killed” at the end of its life, like other Bronze Age objects. With hindsight, it was significant that the boat was found and studied by mainstream archaeologists who naturally focused on its cultural context. At the time, ancient boats were often considered only from a narrower technological perspective, but news about the Dover boat reached to broad audience. In 2002, on the tenth anniversary of the discovery, the Dover Bronze Age Boat Trust hosted a conference, where this meeting of different traditions became apparent. Alongside technical papers about the boat, other speakers explored its social and economic contexts, and the religious perceptions of boats in Bronze Age societies. Many speakers came from overseas, and debate about cultural connections was renewed. Within seven years of excavation, the Dover boat had been conserved and displayed, but it was apparent that there were issues that could not be resolved simply by studying the old wood. Experimental archaeology seemed to be the solution: a boat reconstruction, half-scale or full-sized, would permit assessment of the different hypotheses regarding its build and the missing end. The possibility of returning to Dover to search for a boat’s unexcavated northern end was explored, but practical and financial difficulties were insurmountable and there was no guarantee that the timbers had survived the previous decade in the changed environment. Detailed proposals to reconstruct the boat were drawn up in 2004. Archaeological evidence was beginning to suggest a Bronze Age community straddling the Channel, brought together by the sea, rather than separated by it. In a region today divided by languages and borders, archaeologists had a duty to inform the general public about their common cultural heritage. The boat project began in England but it was conceived from the start as a European collaboration. Reconstruction was only part of a scheme that would include a major exhibition and an extensive educational and outreach programme. Discussions began early in 2005 with archaeological bodies, universities and heritage organizations either side of the Channel. There was much enthusiasm and support, and an official launch of the project was held at an international seminar in France in 2007. Financial support was confirmed in 2008 and the project then named BOAT 1550BC got under way in June 2011. A small team began to make the boat at the start of 2012 on the Roman Lawn outside Dover museum. A full-scale reconstruction of a midsection had been made in 1996, primarily to see how Bronze Age replica tools performed. In 2012, however, the hull shape was at the centre of the work, so modern power tools were used to carve the oak planks, before turning to prehistoric tools for finishing. It was decided to make the replica half-scale for reasons of cost and time, any synthetic materials were used for the stitching, owing to doubts about the scaling and tight timetable. Meanwhile, the exhibition was being prepared ready for opening in July 2012 at the Castle Museum in Boulognesurmer. Entitled “Beyond the Horizon: Societies of the Channel & North Sea 3,500 years ago”, it brought together for the first time a remarkable collection of Bronze Age objects, including many new discoveries for commercial archaeology and some of the great treasure of the past. The reconstructed boat, as a symbol of the maritime connections that bound together the communities either side of the Channel, was the centerpiece.

Question 1 - 5
Complete the flowchart below.
Choose ONE WORD ONLY from the text for each answer.
Key events
STEP 01
1992 the boat was discovered during the construction of a
1
﻿﻿
STEP 02
2002 an international
2
﻿ was held to gather information
STEP 03
2004
3
﻿ for the reconstruction were produced
STEP 04
2007 the
4
﻿ of BOAT 1550BC took place
STEP 05
2012 the Bronze Age
5
﻿ featured the boat and other objects
Question 6 - 9
Do the following statements agree with the information given in the Reading Passage?
In following statements below, choose
TRUE if the statement agrees with the information.
FALSE if the statement contradicts the information.
NOT GIVEN if it is impossible to say what the writer thinks about this.
6
Archaeologists realized that the boat had been damaged on purpose
7
Initially, only the technological aspects of the boat were examined
8
Archaeologists went back to the site to try and find the missing northern
9
Evidence found in 2004 suggested that the Bronze Age Boat had been used for trade
Question 10 - 13
Answer the question below.
Choose NO MORE THAN THREE WORDS AND/OR A NUMBER
10
How far under the ground was the boat found?
11
What natural material had been secured to the boat to prevent water entering?
12
What aspect of the boat was the focus of the 2012 reconstruction?
13
Which two factors influenced in decision not to make a full-scale reconstruction of the boat?