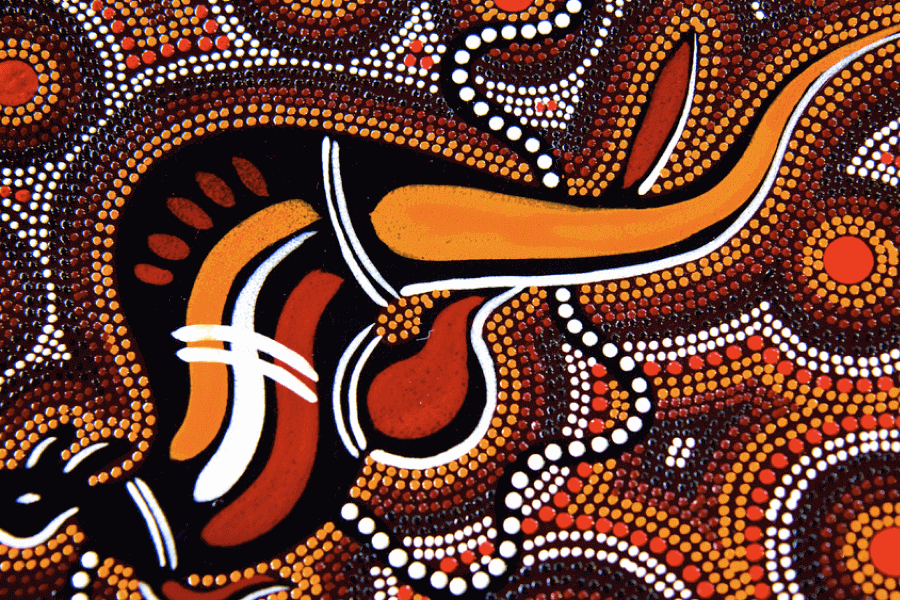 Painters of time
A
A. The works of Aboriginal artists are now much in demand throughout the world, and not just in Australia, where they are already fully recognized: the National Museum of Australia, which opened in Canberra in 2001, designated 40% of its exhibition space to works by Aborigines. In Europe their art is being exhibited at a museum in Lyon, France, while the future Quai Branly museum in Paris, which will be devoted to arts and civilizations of Africa. Asia, Oceania and the Americas, plans to commission frescoes by artists from Australia.
B
B. Their artistic movement began about 30 years ago, but its roots go back to time immemorial. All the works refer to the founding myth of the Aboriginal culture, ‘the Dreaming’. That internal geography, which is rendered with a brush and colours, is also the expression of the Aborigines' long quest to regain the land which was stolen from them when Europeans arrived in the nineteenth century. ‘Painting is nothing without history.' says one such artist. Michael Nelson Tjakamarra.
C
C. There are now fewer than 400.000 Aborigines living in Australia. They have been swamped by the country's 17.5 million immigrants. These original ‘natives' have been living in Australia for 50.000 years, but they were undoubtedly maltreated by the newcomers. Driven back to the most barren lands or crammed into slums on the outskirts of cities, the Aborigines were subjected to a policy of ‘assimilation’, which involved kidnapping children to make them better ‘integrated' into European society, and herding the nomadic Aborigines by force into settled communities.
D
D. It was in one such community, Papunya, near Alice Springs, in the central desert, that Aboriginal painting first came into its own. In 1971, a white schoolteacher, Geoffrey Bardon, suggested to a group of Aborigines that they should decorate the school walls with ritual motifs so as to pass on to the younger generation the myths that were starting to fade from their collective memory, then gave them brushes, colours and surfaces to paint on cardboard and canvases. He was astounded by the result. But their art did not come like a bolt from the blue: for thousands of years Aborigines had been ‘painting' on the ground using sands of different colours, and on rock faces. They had also been decorating their bodies for ceremonial purposes. So there existed a formal vocabulary.
E
E. This had already been noted by Europeans. In the early twentieth century, Aboriginal communities brought together by missionaries in northern Australia had been encouraged to reproduce on tree bark the motifs found on rock faces. Artists turned out a steady stream of works, supported by the churches, which helped to sell them to the public, and between 1950 and I960 Aboriginal paintings began to reach overseas museums. Painting on bark persisted in the north, whereas the communities in the central desert increasingly used acrylic paint, and elsewhere in Western Australia women explored the possibilities of wax painting and dyeing processes, known as ‘batik’.
F
F. What Aborigines depict are always elements of the Dreaming, the collective history that each community is both part of and guardian of. The Dreaming is the story of their origins, of their ‘Great Ancestors’, who passed on their knowledge, their art and their skills (hunting, medicine, painting, music and dance) to man. ‘The Dreaming is not synonymous with the moment when the world was created.’ says Stephane Jacob, one of the organizers of the Lyon exhibition. ‘For Aborigines, that moment has never ceased to exist. It is perpetuated by the cycle of the seasons and the religious ceremonies which the Aborigines organize. Indeed the aim of those ceremonies is also to ensure the permanence of that golden age. The central function of Aboriginal painting, even in its contemporary manifestations, is to guarantee the survival of this world. The Dreaming is both past, present and future.'
G
G. Each work is created individually, with a form peculiar to each artist, but it is created within and on behalf of a community who must approve it. An artist cannot use a 'dream' that does not belong to his or her community, since each community is the owner of its dreams, just as it is anchored to a territory marked out by its ancestors, so each painting can be interpreted as a kind of spiritual road map for that community.
H
H. Nowadays, each community is organized as a cooperative and draws on the services of an art adviser, a government-employed agent who provides the artists with materials, deals with galleries and museums and redistributes the proceeds from sales among the artists. Today, Aboriginal painting has become a great success. Some works sell for more than $25,000, and exceptional items may fetch as much as $180,000 in Australia.
I
I. 'By exporting their paintings as though they were surfaces of their territory, by accompanying them to the temples of western art, the Aborigines have redrawn the map of their country, into whose depths they were exiled,* says Yves Le Fur of the Quai Branlv museum. ‘Masterpieces have been created. Their undeniable power prompts a dialogue that has proved all too rare in the history of contacts between the two cultures’.

Question 1 - 6
Reading Passage has nine paragraphs A-l.
Choose the most suitable heading for paragraphs A-F from the list of headings below.
List of Headings
I
Amazing results from a project
II
New religious ceremonies
III
Community art centres
IV
Early painting techniques and marketing systems
V
Mythology and history combined
VI
The increasing acclaim for Aboriginal art
VII
Belief in continuity
VIII
Oppression of a minority people
1
Paragraph A
2
Paragraph B
3
Paragraph C
4
Paragraph D
5
Paragraph E
6
Paragraph F
Question 7 - 10
Complete the flow chart below.
Choose NO MORE THAN THREE WORDS from the passage for each answer.
Untitled
STEP 01
For
7
, Aborigines produced ground and rock paintings.
STEP 02
Early twentieth century: churches first promoted the use of
8
for paintings.
STEP 03
Mid-twentieth century: Aboriginal paintings were seen in
9
STEP 04
Early 1970s: Aboriginal painted traditional patterns on
10
in one commodity
Question 11 - 13
Choose appropriate options A, B, C or D.
11
In Paragraph G, the writer suggests that an important feature of Aboriginal art is
A
its historical context
B
its significance to the group
C
its religious content
D
its message about the environment
12
In Aboriginal beliefs, there is a significant relationship between
A
communities and lifestyles
B
images and techniques
C
culture and form
D
ancestors and territory
13
In Paragraph I. the writer suggests that Aboriginal art invites Westerners to engage with
A
the Australian land
B
their own art
C
Aboriginal culture
D
their own history

﻿ 1 In the early twentieth century﻿ , Aboriginal communities﻿ had been encouraged to﻿ reproduce on tree bark the motifs﻿ found on rock faces. ﻿

﻿ Each work﻿ is created﻿ within and on behalf of a community who must approve it.

=> Ứng với đáp án B - its significance to the group

﻿ An artist﻿ cannot use a 'dream'﻿ that does not belong to his or her community﻿ , since﻿ each community﻿ is the owner of its dreams﻿ , just as﻿ it is anchored to﻿ a territory﻿ marked out by﻿ its ancestors﻿