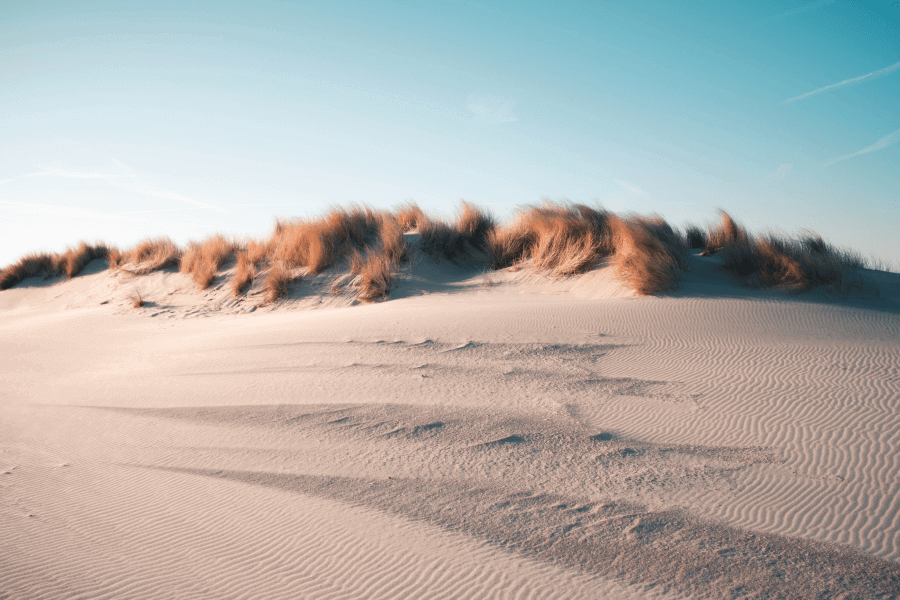 Living Dunes
When you think of a sand dune, you probably picture a barren pile of lifeless sand. But sand dunes are actually dynamic natural structures. They grow, shift and travel. They crawl with living things. Some sand dunes even sing.
A
A. Although no more than a pile of wind-blown sand, dunes can roll over trees and buildings, march relentlessly across highways, devour vehicles on its path, and threaten crops and factories in Africa, the Middle East, and China. In some places, killer dunes even roll in and swallow up towns. Entire villages have disappeared under the sand. In a few instances the government built new villages for those displaced only to find that new villages themselves were buried several years later. Preventing sand dunes from overwhelming cities and agricultural areas has become a priority for the United Nations Environment Program.
B
B. Some of the most significant experimental measurements on sand movement were performed by Ralph Bagnold, a British engineer who worked in Egypt prior to World War II. Bagnold investigated the physics of particles moving through the atmosphere and deposited by wind. He recognised two basic dune types, the crescentic dune, which he called “barchan,” and the linear dune, which he called longitudinal or “sief ’ (Arabic for “sword”). The crescentic barchan dune is the most common type of sand dune. As its name suggests, this dune is shaped like a crescent moon with points at each end, and it is usually wider than it is long. Some types of barchan dunes move faster over desert surfaces than any other type of dune. The linear dune is straighter than the crescentic dune with ridges as its prominent feature. Unlike crescentic dunes, linear dunes are longer than they are wide—in fact, some are more than 100 miles (about 160 kilometers) long. Dunes can also be comprised of smaller dunes of different types, called complex dunes.
C
C. Despite the complicated dynamics of dune formation, Bagnold noted that a sand dune generally needs the following three things to form: a large amount of loose sand in an area with little vegetation—usually on the coast or in a dried-up river, lake or sea bed; a wind or breeze to move the grains of sand; and an obstacle, which could be as small as a rock or as big as a tree, that causes the sand to lose momentum and settle. Where these three variables merge, a sand dune forms.
D
D. As the wind picks up the sand, the sand travels, but generally only about an inch or two above the ground, until an obstacle causes it to stop. The heaviest grains settle against the obstacle, and a small ridge or bump forms. The lighter grains deposit themselves on the other side of the obstacle. Wind continues to move sand up to the top of the pile until the pile is so steep that it collapses under its own weight. The collapsing sand comes to rest when it reaches just the right steepness to keep the dune stable. The repeating cycle of sand inching up the windward side to the dune crest, then slipping down the dune’s slip face allows the dune to inch forward, migrating in the direction the wind blows.
E
E. Depending on the speed and direction of the wind and the weight of the local sand, dunes will develop into different shapes and sizes. Stronger winds tend to make taller dunes; gentler winds tend to spread them out. If the direction of the wind generally is the same over the years, dunes gradually shift in that direction. But a dune is “a curiously dynamic creature”, wrote Farouk El-Baz in National Geographic. Once formed, a dune can grow, change shape, move with the wind and even breed new dunes. Some of these offspring may be carried on the back of the mother dune. Others are born and race downwind, outpacing their parents.
F
F. Sand dunes even can be heard ‘singing’ in more than 30 locations worldwide, and in each place the sounds have their own characteristic frequency, or note. When the thirteenth century explorer Marco Polo encountered the weird and wonderful noises made by desert sand dunes, he attributed them to evil spirits. The sound is unearthly. The volume is also unnerving. Adding to the tone’s otherworldliness is the inability of the human ear to localise the source of the noise. Stéphane Douady of the French national research agency CNRS and his colleagues have been delving deeper into dunes in Morocco, Chile, China and Oman, and believe they can now explain the exact mechanism behind this acoustic phenomenon.
G
G. The group hauled sand back to the laboratory and set it up in channels with automated pushing plates. The sands still sang, proving that the dune itself was not needed to act as a resonating body for the sound, as some researchers had theorised. To make the booming sound, the grains have to be of a small range of sizes, all alike in shape: well-rounded. Douady’s key discovery was that this synchronised frequency—which determines the tone of sound—is the result of the grain size. The larger the grain, the lower the key. He has successfully predicted the notes emitted by dunes in Morocco, Chile and the US simply by measuring the size of the grains they contain. Douady also discovered that the singing grains had some kind of varnish or a smooth coating of various minerals: silicon, iron and manganese, which probably formed on the sand when the dunes once lay beneath an ancient ocean. But in the muted grains this coat had been worn away, which explains why only some dunes can sing. He admits he is unsure exactly what role the coating plays in producing the noise. The mysterious dunes, it seems, aren’t quite ready yet to give up all of their secrets.

Question 1 - 7
Reading passage has seven paragraphs, A-G.
Choose the correct heading for paragraphs A-G from the list of headings below.
List of Headings
I
Shaping and reforming
II
Causes of desertification
III
Need combination of specific conditions
IV
Potential threat to industry and communication
V
An old superstition demystified
VI
Differences and similarities
VII
A continuous cycling process
VIII
Habitat for rare species
IX
Replicating the process in laboratory
X
Commonest type of dune
1
Paragraph A
2
Paragraph B
3
Paragraph C
4
Paragraph D
5
Paragraph E
6
Paragraph F
7
Paragraph G
Question 8 - 10
Complete the sentences below.
Choose ONE WORD ONLY from the passage for each answer.
8
﻿
﻿
dune is said to have long ridges that can extend hundreds of miles.
9
According to Bagnold, an
﻿
is needed to stop the sand from movingbefore a dune can form.
10
Stéphane Douady believes the singing of dunes is not a spiritual phenomenon, but purely
﻿
﻿
Question 11 - 14
Complete the summary below.
Choose ONE WORD ONLY from the passage for each answer.
There are many different types of dunes, two of which are most commonly found in deserts throughout the world, the linear dune and the
11
dune, some times also known as the crescentic dune. It’s been long known that in some places dunes can even sing and the answer lies in the sand itself. To produce singing sand in lab, all the sands must have similar
12
. And scientists have discovered that the size of the sand can affect the
13
of the sound. But the function of the varnish composed by a mixture of
14
still remains puzzling.

Hiểu câu hỏi: _____ dune is said to have long ridges that can extend hundreds of miles

Hiểu câu hỏi: an _____ is needed to stop the sand from moving before a dune can form

Hiểu câu hỏi: Stéphane Douady believes the singing of dunes is not a spiritual phenomenon, but purely _____

﻿ 1 Adding to﻿ the tone’s otherworldliness is the inability of the human ear to localize the source of the noise.﻿

Hiểu câu hỏi: the linear dune and the _____ dune, some times also known as the crescentic dune

﻿ Douady’s key discovery﻿ was that﻿ this synchronised frequency — which determines the tone of sound — is the result of the grain size.

﻿ 1 the singing grains﻿ had some kind of varnish or a smooth coating of various minerals﻿ : silicon, iron and manganese ﻿

﻿ 2 But﻿ in the muted grains﻿ this coat﻿ had been worn away﻿ , which explains﻿ why only some dunes can sing. ﻿

﻿ 3 He admits﻿ he is unsure exactly﻿ what role the coating plays in producing the noise.