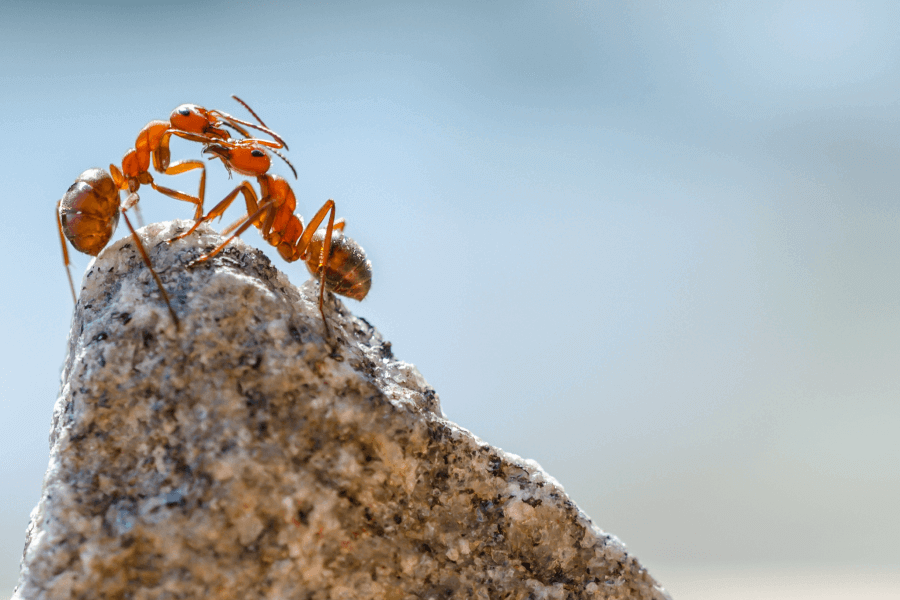 Question 1 - 6
Use the information in the passage to match the options (listed A-C) with activities or features of ants below.
NB you may use any letter more than once
List of Findings
A
Leaf-cutting ants
B
Lower attines
C
Both leaft-cutting ants and lower attine ants
1
can use toxic leaves to feed fungus
2
build small nests and live with different foreign fungus
3
use dead vegetation to feed fungus
4
raise a single fungus which do not live with other variety of foreigners
5
normally keep a highly dangerous parasite under control
6
use special strategies to fight against Escovopsis
Question 7 - 11
The reading Passage has ten paragraphs A-J.
Which paragraph contains the following information?
7
Dangerous outcome of Escovopsis.
8
Risk of growing single fungus.
9
Comparison of features of two different nests for feeding gardens.
10
Discovery of significant achievements made by ants earlier than human.
11
Advantage of growing new breed of fungus in the ant farm.
Question 12 - 13
Choose the correct letter A, B, C or D.
12
How does the author think of Currie’s opinion on the saying “ants keep their gardens free of parasites”?
A
his viewpoint was verified later.
B
his earlier study has sufficient evidence immediately.
C
there is no details mentioned in the article.
D
his opinion was proved to be wrong later on.
13
What did scientists find on the skin of ants under microscope?
A
some white cloud mold embed in their skin
B
that wax is all over their skin
C
a substance which is useful to humans
D
a substance which suppresses growth of fungus.

﻿ 2 The ants’ achievement is remarkable﻿ because﻿ it﻿ allows them to eat﻿ , courtesy of their mushroom’s digestive powers﻿ leaves laden with chemicals designed to sicken browsers.﻿

Paragraph C: the other groups,﻿ known as the lower attines﻿ because﻿ their nests﻿ are smaller﻿

Paragraph D: But﻿ the lower attines ants﻿ used different varieties of the fungus

﻿ The leaf-cutters﻿ use fresh vegetation﻿ ; the other groups,﻿ known as the lower attines﻿ , feed their gardens with﻿ detritus like dead leaves, insects and feces﻿

﻿ 3 Although﻿ new leaf-cutter gardens﻿ start off free of Escovopsis﻿ , within two years﻿ some 60 percent become infected. ﻿

﻿ 7 There is now a possible reason﻿ to explain why﻿ the lower attine species keep changing the variety of fungus﻿ — to stay one step ahead of the relentless Escovopsis.

﻿ Because both the leaf-cutters and the lower attines﻿ use Streptomyces﻿

﻿ 2 But a century of ant research﻿ offered no support for the idea.﻿

﻿ 3 Textbooks﻿ describe how leaf-cutter ants scrupulously weed their gardens of all foreign organisms.﻿

Hiểu câu hỏi: What did scientists find on the skin of ants under microscope?