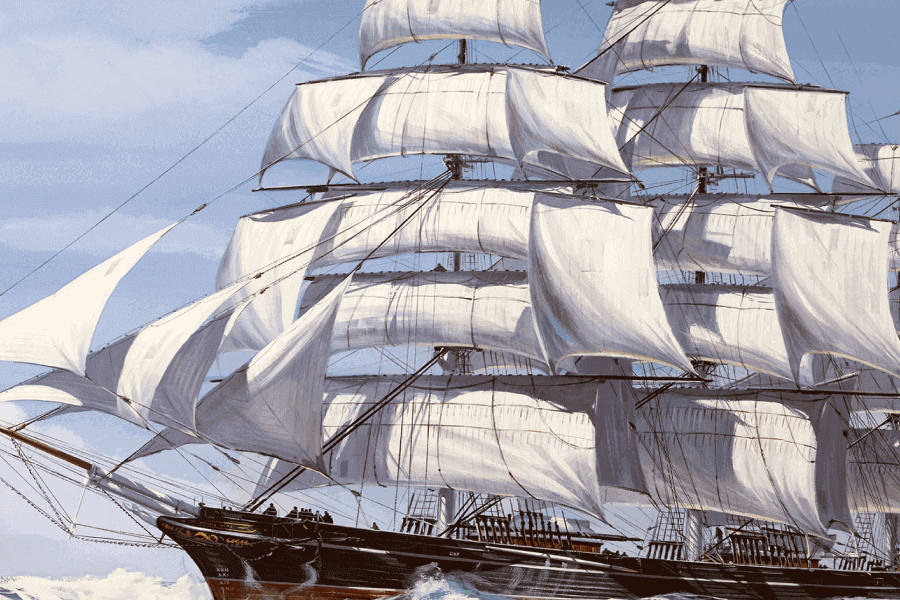 Cutty Sark: The Fastest Sailing Ship Of All Time
A
A. The nineteenth century was a period of great technological development in Britain, and for shipping the major changes were from wind to steam power, and from wood to iron and steel. The fastest commercial sailing vessels of all time were clippers, three-masted ships built to transport goods around the world, although some also took passengers. From the l 840s until 1869, when the Suez Canal opened and steam propulsion was replacing sail, clippers dominated world trade. Although many were built, only one has survived more or less intact: Cutty’ Sark. now on display in Greenwich, southeast London.
B
B. Cutty Sark’s unusual name comes from the poem Tam O'Shanter by the Scottish poet Robert Bums. Tam, a farmer, is chased by a witch called Nannie, who is wearing a ‘cutty sark’ – an old Scottish name for a short nightdress. The witch is depicted in Cutty Sark’s figurehead – the carving of a woman typically at the front of old sailing ships. In legend, and in Bums’s poem, witches cannot cross water, so this was a rather strange choice of name for a ship.
C
C. Cutty Sark was built in Dumbarton. Scotland, in 1869 for a shipping company owned by John Willis. To carry out construction, Willis chose a new shipbuilding firm, Scott & Linton, and ensured that the contract with them put him in a very strong position. In the end. the firm was forced out of business, and the ship was finished by a competitor.
D
D. Willis’s company was active in the tea trade between China and Britain, where speed could bring ship owners both profits and prestige, so Cutty Sark was designed to make the journey more quickly than any other ship. On her maiden voyage, in 1870. she set sail from London, carrying large amounts of goods to China. She returned laden with tea, making the journey back to London in four months. However, Cutty Sark never lived up to the high expectations of her owner, as a result of bad winds and various misfortunes. On one occasion, in 1872. the ship and a rival clipper, Thermopylae, left port in China on the same day. Crossing the Indian Ocean, Cutty Sark gained a lead of over 400 miles, but then her rudder was severely damaged in stormy seas, making her impossible to steer. The ship’s crew had the daunting task of repairing the rudder at sea. and only succeeded at the second attempt. Cutty Sark reached London a week after Thermopylae.
E
E. Steam ships posed a growing threat to clippers, as their speed and cargo capacity increased. In addition, the opening of the Suez Canal in 1869. the same year that Cutty Sark was launched, had a serious impact. While steam ships could make use of the quick, direct route between the Mediterranean and the Red Sea, the canal was of no use to sailing ships, which needed the much stronger winds of the oceans, and so had to sail a far greater distance. Steam ships reduced the journey time between Britain and China by approximately two months.
F
F. By 1878, tea traders weren’t interested in Cutty Sark, and instead, she took on the much less prestigious work of carrying any cargo between any two ports in the world. In 1880, violence aboard the ship led ultimately to the replacement of the captain with an incompetent drunkard who stole the crew’s wages. He was suspended from service, and a new captain appointed. This marked a turnaround and the beginning of the most successful period in Cutty Sark’s working life, transporting wool from Australia to Britain. One such journey took just under 12 weeks, beating every other ship sailing that year by around a month.
G
G. The ship’s next captain, Richard Woodget. was an excellent navigator, who got the best out of both his ship and his crew. As a sailing ship, Cutty Sark depended on the strong trade winds of the southern hemisphere, and Woodget took her further south than any previous captain, bringing her dangerously close to icebergs off the southern tip of South America. His gamble paid off, though, and the ship was the fastest vessel in the wool trade for ten years.
H
H. As competition from steam ships increased in the 1890s. and Cutty Sark approached the end of her life expectancy, she became less profitable. She was sold to a Portuguese firm, which renamed her Ferreira. For the next 25 years, she again carried miscellaneous cargoes around the world.
I
I. Badly damaged in a gale in 1922, she was put into Falmouth harbour in southwest England, for repairs. Wilfred Dowman, a retired sea captain who owned a training vessel, recognised her and tried to buy her, but without success. She returned to Portugal and was sold to another Portuguese company. Dowman was determined, however, and offered a high price: this was accepted, and the ship returned to Falmouth the following year and had her original name restored.
J
J. Dowman used Cutty Sark as a training ship, and she continued in this role after his death. When she was no longer required, in 1954, she was transferred to dry dock at Greenwich to go on public display. The ship suffered from fire in 2007, and again, less seriously, in 2014. But now Cutty Sark attracts a quarter of a million visitors a year.

Question 1 - 8
Do the following statements agree with the information given in Reading Passage?
In following statements below, choose
TRUE if the statement agrees with the information
FALSE if the statement contradicts the information
NOT GIVEN if it is impossible to say what the writer thinks about this
1
Clippers were originally intended to be used as passenger ships.
2
Cutty Sark was given the name of a character in a poem.
3
The contract between John Willis and Scott & Linton favoured Willis.
4
John Willis wanted Cutty Sark to be the fastest tea clipper travelling between the UK and China.
5
Despite storm damage, Cutty Sark beat Thermopylae back to London.
6
The opening of the Suez Canal meant that steam ships could travel between Britain and China faster than clippers.
7
Steam ships sometimes used the ocean route to travel between London and China.
8
Captain Woodget put Cutty Sark at risk of hitting an iceberg.
Question 9 - 13
Complete the sentences below.
Choose ONE WORD ONLY from the passage for each answer.
Write your answers in boxes on your answer sheet.
9
After 1880, Cutty Sark carried
…………………………
as its main cargo during its most successful time.
10
As a captain and
………………………….,
Woodget was very skilled
11
Ferreira went to Falmouth to repair damage that a
………………………….
had caused.
12
Between 1923 and 1954, Cutty Sark was used for
………………………..
﻿
13
Cutty Sark has twice been damaged by
…………………………
in the 21st century.