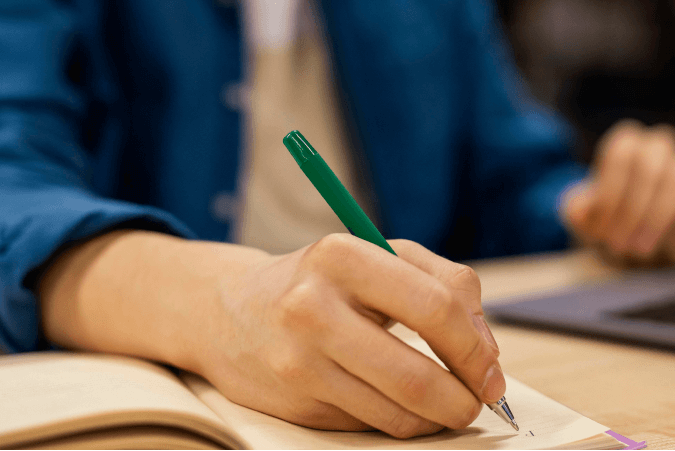 OK and welcome back. During the short break we just took, several of you approached me with questions.
So, before going on with the orientation talk, I’d like to address those queries.
As I’ve found, if one person asks a question, probably a dozen others are wondering about the same thing!
The first question is whether Wassamatta U. employs modules technology as an instruction method.
The answer is yes, we do. At least that’s what the university catalogue says.
If some of you don’t understand what “modules technology” is, don’t worry. I googled the word but couldn’t find it.
Apparently, though, it’s a method of broadband, wireless access. At least that’s what an American company’s website told me.
But again, don’t worry. If you need to know something more, your professor can tell you.
Another question someone asked me was what tomorrow’s workshop on “Research Methods and Skills” was about.
Well, research skills include any method you can imagine for finding and presenting any information you need. That’s not just schoolwork, either.
Writing English - the native language for most of you - and finding a job are also research skills. And, yes, those will be addressed in tomorrow’s workshop.
As you know, Wassamatta U. is one of this country's premier universities for the study of “the dismal science", economics. Some of you, it seems, want to get a jump on their classmates.
During the break, half a dozen of you came up and asked me where to find economics tomes. I know it’s odd, but this school’s library holdings are divided up between two libraries.
Economics books are in the old library. If you look out of the window behind me, you can see it. It’s the red brick building.
Oh, before I forget, you economics types also need a lot of maths, am I right?
Well, those Maths books are neither in the old library nor in the new one. They can be found in the Maths Department Building.
Why am I telling you this? Doesn’t “the Invisible Hand” guide economists? Maybe it’s good you asked: in 2008, that Hand shoved most of the world economy off a cliff, didn’t it?
Now I realise that most of you couldn’t bring a computer printer or a photocopier from home.
So I’m sure you’re already wondering where you can copy things like term papers, Internet articles, and things like that. I have some good news and some bad news.
The good news is that there are a number of places you can make copies. These include both libraries and the Student Union Building.
Now the bad news. I am sorry to say, most classroom buildings and academic departments do not have copiers students can use.
So most of the large buildings you see around campus do not have copiers for students. The copiers there are reserved for professors and office staff.
Oh, yes! I nearly forget to tell you. If you need to have printing done, all the copiers available to students are laser printers.
Plus, for your convenience, you can pay using prepaid cards. You can get those in the Student Union Building.
That just covers the questions put to me. If you have more, please see me during the next break at 2:15.
Right now, though, I’d like to start to give you a rundown on the various facilities here on campus. That way, you won’t get lost so easily in the weeks to come.
I have been told that this year’s incoming class features a large number of married students and parents. So, you must be wondering where to put the baby while you’re in class. OK, right now, we are in the Student Union Building, right?
Remember the big doors in front where you all came in? If you go out of the building, you can see the Nursery is just on the other side of this building. It’s only about twenty metres away! Convenient, eh?
Next, we’re all from different places around the country. Some of you are from other countries. That means we’re pretty likely to get sick during the first months of school as we expose each other to many new viruses.
So, where’s the doctor? Of course, you need to find the Medical Services Centre which is on the right as you leave the building. Remember, that’s the second building on the right.
And if you look out of that window, you can see a lot of antennae and satellite dishes on the roof. So that's where we call the Media Centre
Yeah, I know, I think it’s confusing, too. The Media Centre is next to the Medical Centre. The chairwoman of the Journalism School on the first floor doesn’t like it when people who wander in there mistake her for a nurse!
Chances are you’ll have at least one Maths class while you’re here.
That red building there just outside to the left is the Maths Department Building.
I know, it looks about as old as the subject as Maths, but I assure you that the inside is equipped with state-of-the-art classroom equipment including interactive chalkboards and surround sound in every room.
Oh, can you see the back building there? Yes, behind the Media Centre. Quite new, isn't it? That’s the new library, just decorated.
They’re back-to-back, you might say. If you look just to the left of it at the lower, older-looking building, you’ll find the old library.
It’s nice and quiet - perfect for those marathon study sessions during exam week. Since the weather is so nice, why don't we stop looking at our maps but go for a walk around the campus?

﻿Đầu tiên nghe "whether Wassamatta U. employs modules technology as an instruction method"

Sau đó nghe "The answer is yes, we do"