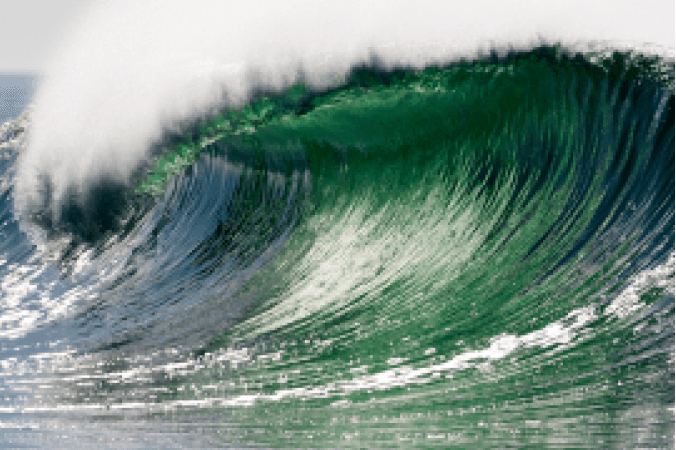 Good afternoon and welcome to this Earth Sciences lecture. Today we’re going to look at tidal; or more correctly, tsunami .
Deep below the ocean’s surface tectonic plates collide, and every once in a while, these forces produce an earthquake.
The energy of such submarine earthquakes can produce tidal waves, which radiate out in all directions from the epicentre of the quake, moving at speeds of up to 500 miles per hour.
When these waves reach shore, they can cause enormous destruction and loss of life. Tidal waves are actually miss named.
They are not caused by tides. A more accurate word for them is the Japanese name tsunami, which means, harbour.
They are also sometimes called seismic sea waves, since they can be caused by seismic disturbances such as submarine quakes.
However, that name is not really accurate either, since tsunami can also be caused by landslides, volcanic eruptions , nuclear explosions, and even impacts of objects from outer space, such as meteorites , asteroids, and comets .
Earthquakes though are the largest cause of tsunami. Tectonic plates cover the world’s surface and their movement can be detected anywhere in the world.
Some areas of the world are more prone to greater movement, and it is in these places that the largest waves can occur.
Large vertical movements of the earth’s crust occur at plate boundaries which are known as faults.
The Pacific Ocean’s denser oceanic plates are often known to slip under continental plates in a process known as subduction, and subduction earthquakes are the most effective in generating tsunamis.
A tsunami can be generated by any disturbance that displaces a large water mass from its equilibrium position. In the case of earthquake-generated tsunamis, the water column is disturbed by the uplift or subsidence of the sea floor.
Submarine landslides, which often accompany large earthquakes, as well as collapses of volcanic edifices, can also disturb the overlying water column as sediment and rock slump down, and are redistributed across the sea floor.
submarine volcanic eruptions can create an impulsive force that uplifts the water column and generates a tsunami.
Conversely, super marine landslides and cosmic body impacts disturb the water from above, as momentum from falling debris is transferred to the water into which the debris falls
Generally speaking, tsunamis generated from these mechanisms, unlike the devastating Pacific-wide tsunamis caused by earthquakes, dissipate quickly and rarely affect coastlines distant from the source area.
Tsunamis are very hard to detect, since they cannot be seen when they are in the deep ocean.
The distance between two wave crests can be 500 kilometers and, because of this, the wave height is only a few feet.
Because the rate at which a wave loses its energy is inversely related to its wavelength , tsunamis not only propagate at high speeds, they can also travel great, transoceanic distances with limited energy losses.
As the tsunami reaches shallow water however, its speed decreases, but the energy it contains remains about the same. Instead of travelling fast, the wave rises high.
The National Oceanic and Atmospheric Administration has set up seismic detection system to monitor earthquakes and predict the possible arrival of tidal waves for Pacific countries
Buoys at sea can also detect water pressure changes that can indicate tsunamis moving through the ocean.
But when tsunamis originate near the shore there is often little chance to warn people.
Let’s look at some examples of tsunami and their causes and effects .Some can be relatively harmless.
In 1992 an offshore landslide caused a tidal wave of only about three feet high that struck at low tide, so Humboldt County, where it hit, got off easy with no casualties .
On January 13th in 1992, a Pacific Ocean earthquake off the coast of San salvador , registering 7.6 on the Richter scale, did not cause any ocean disturbance at all.
However, a recent tidal wave, which struck Papua New Guinea on july 17th 1998 , was 23 feet high, and killed at least 1200 people. This wave was caused by a agnitude 7.1 submarine earthquake.
On July 17, 1998 a Papua New Guinea tsunami killed roughly 3,000 people A huge underwater volcanic eruption 15 miles offshore was followed within 10 minutes by a wave some 40 feet tall.
The villages of Arop and Warapu were destroyed.
One of the worst tsunami disasters engulfed whole villages along Sanriku, Japan, in 1896 .
An underwater earthquake induced a wave of 35 feet drowning some 26,000 people.
Finally, about 8,000 years ago, a massive undersea landslide off the coast of Norway sent a 30- foot wall of water barreling into the uninhabited northern coast of Europe.
If this were to recur today, as scientists say it could, almost anywhere in the world, it would cost billions if not tens of billions of dollars to repair the damage to coastal cities and kill tens of thousands of people.

﻿Sau đó, theo người nói, ''The Pacific Ocean’s denser oceanic plates are often known to slip under continental plates in a process known as subduction, and subduction earthquakes are the most effective in generating tsunamis''