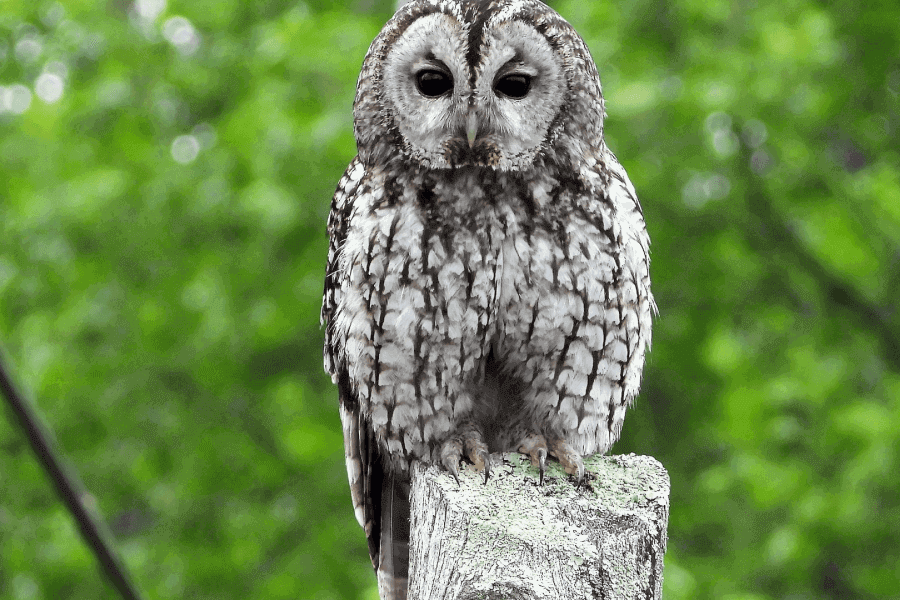 Question 1 - 10
Complete the notes below.
Write ONE WORD ONLY for each answer.
The Tawny Owl
Most
1
﻿  owl species in UK
Strongly nocturnal
Habitat
Mainly lives in
2
﻿  , but can also be seen in urban areas, e.g. parks.
Adaptations:
Diet
Main food is small mammals.
Owls in urban areas eat more
8
﻿.
Survival
Two thirds of young owls die within a
9
﻿.
Owls don’t disperse over long distances.
Owls seem to dislike flying over large areas of
10
﻿.

Good evening everyone. You’re all likely to be familiar with pictures of the tawny owl, because of all the owl species in the UK it’s actually the most common one. But the chances are that you’re more likely to have heard one than actually seen one, as it’s also strongly nocturnal. This means that it normally ventures out at night.
So what kind of habitat does the tawny owl prefer? Well, a survey carried out in the nineteen eighties confirmed that this owl is most likely to be found in woodland. If you look at a map of tawny owl distribution across Britain, you’ll only see gaps in the treeless marshy areas of eastern England, and in some of the more upland parts of north-west Scotland. However, you can sometimes find populations of tawny owls in urban areas too, either in parks or in large gardens.
The tawny owl shows some obvious adaptations to its natural habitat. For example, both its wings and its tail are short, which helps it to manoeuvre through the trees. Also the bird’s plumage is a mixture of brown and grey, and this provides suitable camouflage for when the owl perches up against a tree trunk.
Then, there are its large eyes. The tawny owl's visual capacities are considerably better than those of humans, and although it can’t see in complete darkness, it’s sufficiently well equipped to be able to navigate its way around woodland on all but the most overcast nights.
Another factor that contributes to the tawny owl's success as a hunter, is its excellent memory of the layout of different areas. If you combine this ability with the owl’s strongly territorial and sedentary nature - most populations of tawny owl are 'sit and wait’ predators - you realise that it has a good opportunity to predict where prey might be found. Finally, as well as having large eyes, the owl’s sense of hearing is excellent, and this helps it to locate potential prey as it sits on its perch.
Turning now to the tawny owl’s diet ... Woodland tawny owls feed mainly on mammals, especially small ones such as wood mice and bank voles. But they’ll also take things like frogs, or bats or even fish, if they happen to be available. In urbanised landscapes, the owls seem to prey more on birds. So there are some differences there.
Let’s just look briefly now at survival rates in the tawny owl. Young tawny owls face a difficult time once they leave home, and two out of every three are likely to die within their first year. So with such high mortality levels it’s a good job that established breeding pairs can produce young over a number of seasons, and maximise their chances of passing their genes on to the next generation of owls.
I’ve already mentioned the sedentary nature of the tawny owl. But it’s not just adult tawny owls that are sedentary in their habits. Young birds, dispersing away from where they were born, rarely move far - the average distance is just four kilometres.
There also appears to be some reluctance to cross large bodies of water - the owl is absent from many of the islands around our shores, with only occasional sightings in Ireland and the Isle of Wight off the south coast of England. Right, well, now I’ll show you some photographs that have been taken in ...