The Pool For The People IELTS Listening Answers With Audio, Transcript, And Explanation 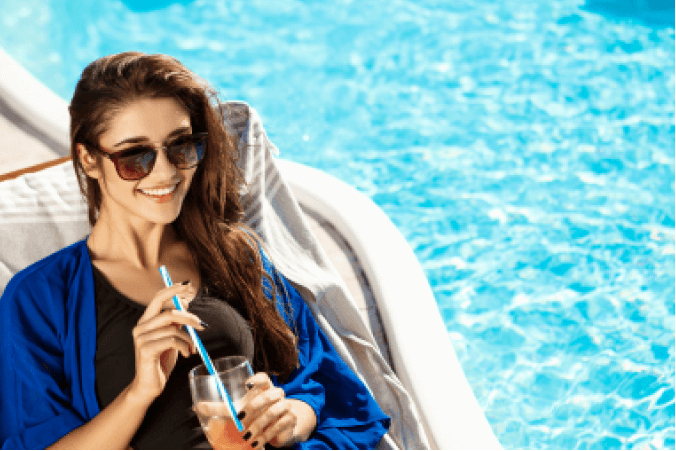 Question 1 - 4
Choose the correct letter, A, B or C.
1
The top two proposals for the design of the swimming pool were chosen by
A
the public
B
the radio station
C
architects
2
What is special about the pool’s construction?
A
It was constructed by the people
B
Its architectural style is one-of-a-kind
C
It is the first pool in Bridgewater
3
News reports covering the new pool expressed concerns over
A
price
B
safety
C
size
4
What factor of the pool’s Grand Opening remains undecided?
A
who will host
B
the exact opening time
C
what sculpture will be in the foyer
Question 5 - 10
What’s the theme of each continent based on the rooms of the clubhouse?
Choose SIX answers from the box and write the correct letter, A-H.
List of Findings
A
film and music
B
mountains
C
space travel
D
jewelry
E
animals
F
waterways
G
volcano
H
ancient forts
5
Asia
6
Antarctica
7
Africa
8
North America
9
Europe
10
South America

Hey if you’re just joining us on WKPX “The Sound”, welcome.
We’re here in the studio with Matt and Cam in the morning we’re talking about keeping the kids occupied on summer vacation.
Folks, there’s a new kid in town in the world of summer fun.
Get ready for the Pool for the People, a pool and outdoor venue created by - that’s right - the people.
Scheduled to open in November, the ideas for everything from the design of the pool right down to the items sold in the snack bar have been decided upon by a sample of 1,050 members of the public.
The public selected two top proposals from over a dozen created by renowned architect Ned Mosby, and the final design is truly something else.
The pool is shaped like a fishbowl, sinking down into the ground, and there’s - you guessed it - a real, live fish tank in the centre! It’s certainly the centre of attention in the Bridgewater area.
Now, you are probably wondering how much an extravagance like this must cost right?
Well, have no fear. At just £15 for adults and £10 for kids, it’s an affordable way to entertain the kids in those dog days of summer.
The only problem now is the possibility that it will in fact become too popular!
The pool is only so large, so swarms of people coming to enjoy it may cause quite a crowd in its first summer of opening.
There will be an opening party for a select audience, and in line with the pool’s mission, the people have decided on all the arrangements.
They collectively decided on actress Rebel Wilson to host the festivities scheduled for later this month, and even dictated the playlist by ranking their top 10 songs from a list of hundreds.
There is some discrepancy, however, on the sculpture design for the foyer at the entrance.
The people elected a jellyfish sculpture to greet entering visitors, but given last week’s vicious attack by a box jellyfish on a local youth, coordinators fear it will bring too much fear to patrons.
The theme of the clubhouse is set to be “international waters” with a different section representing each continent, designed by the legendary local artist Roberta Anuzzi.
Representing Asia in the reception area will be a mosaic made up of prominent animals indigenous to the continent - a camel, a panda, and the Siberian white tiger, to name a few.
In the West lounge, feel the cool, icy vibes of the Transantarctic Mountains of Antarctica.
Makes you cold just thinking about it, doesn’t it? Just seeing a wall with a mural of the glacial mountains is almost enough to cool you off on a December afternoon.
Why not make the trip to the pool a social studies lesson at the same time?
The theme in the lade’s lounge room for Africa may not be what you expected.
A safari? Drum music? The Nile River? No, did you know that Africa was home to the first jewelry? I sure didn’t.
By contrast, as you may expect, North America’s theme for the card room is as modern - even futuristic - as it gets.
Anuzzi created for North America a sort of absurdist print interestingly juxtaposing the moon landing of 1969 with an abstract depiction of humans living on Mars.
Seems to me like an interesting commentary on the future of space exploration.
And in the men’s lounge room, the ancient forts of Sparta, Rome, Greece, and other European civilizations fittingly exhibit the strength and combatant characteristics of these societies.
Finally, the cafe and breakfast room area is an enchanting round room that draws all attention to its centre - where there is a strikingly realistic sculpture of a volcano.
The delicious food may actually be only the second most exciting part of this room in comparison to the 9-foot statue complete with brightly colored molten lava to characterise South America.
Honestly, it is like a museum visiting each room of the clubhouse. Why not make the trip to the pool an educational one for the kids?
We’re going to take a quick commercial break here at WKPX, but we’ll be back in 10 with more on what’s touted to be the Summer’s Hottest Place to Beat the Heat...