The History Of The Electric Guitar IELTS Listening Answers With Audio, Transcript, And Explanation 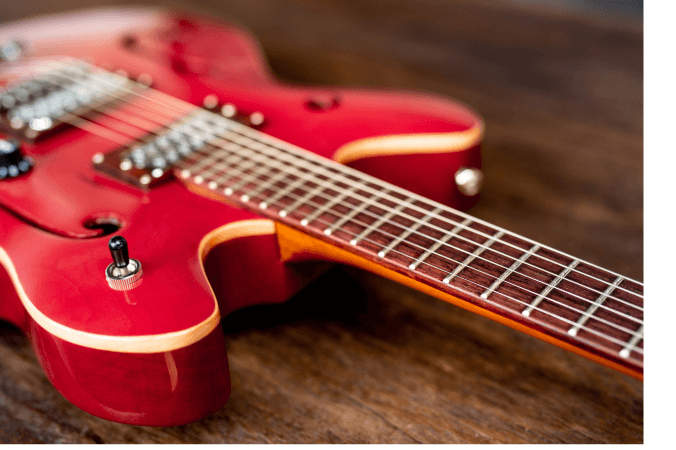 Question 1 - 10
Complete the table below.
Write NO MORE THAN TWO WORDS for each answer.
THE HISTORY OF THE ELECTRIC GUITAR

During today’s lecture in this series about the history of popular music. I’m going to look at the different stages the electric guitar went through before we ended up with the instrument we know so well today.
The driving force behind the invention of the electric guitar was simply the search for a louder sound. In the late 1890s Orville Gibson, founder of the Gibson Mandolin-Guitar Manufacturing Company, designed a guitar with an arched or. curved lop, as is found on a violin. This made it both stronger and louder than earlier designs but it was still hard to hear amongst other louder instruments.
During the 1920s with the beginnings of big–band music, commercial radio and the rise of the recording industry, the need to increase the volume of the guitar became even more important. Around 1925 John Dopyera came up with a solution. He designed a guitar, known as The National Guitar, with a metal body which had metal resonating cones built into the top. It produced a brash tone which became popular with guitarists who played blues but was unsuitable for many other types of music.
Another way of Increasing the volume was thought of in the 1930s. The C. F. Martin Company became known for its ‘Dreadnought‘, a large flat-top acoustic guitar that used steel strings instead of the traditional gut ones. It was widely imitated by other makers.
These mechanical fixes helped, but only up to a point. So guitarists began to look at the possibilities offered by the new field of electronic amplification. What guitar players needed was a way to separate the guitar’s sound and boost it in isolation from the rest of a band or the surroundings.
Guitar makers and players began experimenting with electrical pickups which are the main means of amplification used today. The first successful one was invented in 1931 by George Beauchamp.
He introduced to the market a guitar known as The Frying Pan’ because the playing area consisted of a small round disk. The guitar was hollow and was made of aluminium and steel. He amplified the sound by using a pair of horseshoe–shaped magnets. It was the first commercially successful electric guitar.
So by the mid-1930s, an entirely new kind of sound was born. Yet along with its benefits, the new technology brought problems. The traditional hollow body of a guitar caused distortion and feedback when combined with electromagnetic pickups. Musicians and manufacturers realised that a new kind of guitar should be designed from scratch with amplification in mind.
In 1935 Adolph Rickenbacker produced a guitar which took his name – ‘The Rickenbacker Electro Spanish’. It was the first guitar produced in plastic, which, because of its weight, vibrated less readily than wood. It eliminated the problems of earlier versions which were plagued by acoustic feedback.
‘The Electro Spanish’ had its own problems, however, because it was very heavy, smaller than other guitars of the period, and was quite awkward to play. Developments continued and in 1941 Les Paul made a guitar which he called ‘The Log’, and true to its name, it was totally solid. All previous guitars had been hollow or partly hollow. It looked slightly strange but the next step had been made towards the modem electric guitar.
The first guitar successfully produced in large numbers was made in 1950 by Leo Fender. His Spanish-style electric guitar, known as a ‘Fender Broadcaster’, had a bolt-on neck, and was initially criticised by competitors as being very simple and lacking in craftsmanship. Yet it was immediately successful and was particularly suited to mass production, spurring other guitar companies to follow Fender’s lead.
In 1951 Leo Fender revolutionised the music world yet again when he produced an electric bass guitar. This was the first commercially successful bass model to be played like a guitar. It was easier for players to hit an exact note: that’s why it was called The Precision’.
Although there had already been electric standup basses, this was much more portable. It is now standard in the line-up of any rock band and some historians suggest that entire genres of music, such as reggae and funk, could not exist without it.
In 1952 the Gibson company became Fender’s first major competitor when Ted McCarty created The Gibson Les Paul’ guitar. It was distinctive because it was coloured gold. The reason for this was to disguise the fact that it was made from two different kinds of wood.
In 1954 Leo Fender responded to this successful instrument by introducing The Fender Stratocaster’. It is easily identified by its double-cutaway design and three pickups. This model may be the most influential electric guitar ever produced. The modern guitar as we know it was here to stay.

﻿ Nghe thấy "....designed a guitar with an arched or curved lop, as is found on a violin"