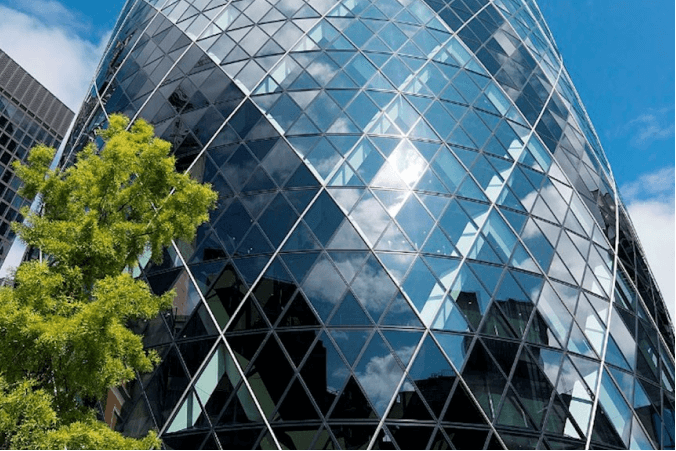 Question 1 - 10
Complete the notes below.
Write ONE WORD ONLY for each question.
THE GHERKIN BUILDING
Commissioned by:
1
﻿ firm called Foster and Partners.
The features of its appearance:
Architectural concept:
The features of its interior:
The future of urban planning and architecture:

Today I’d like to tell you about how U.K architects are playing their part to address the issue of global warming. You have seen many of these iconic buildings while going about your everyday life, but you may not know how they are affecting your tomorrow.
In 2003, construction was completed on the famous Swiss Re Building, or more informally called the Gherkin, a true masterpiece commissioned by the law offices of Foster and Partner. This is not the first ambitious endeavor of the film - they are renowned for their various philanthropic, environmental efforts.
The Gherkin, with its cutting edge green initiative and sharp design, is gaining recognition as an icon in modern architecture. You can pick it out of the London skyline by its unorthodox cigar shape.
While its appearance is the obvious attribute at which to marvel, there is far more to this building than meets the eye. And let’s face it - there’s a lot about this building that meets the eye. The building helps reduce the city’s carbon footprint in a number of ways.
Just a quick note - in case you’re not familiar with the term ‘carbon footprint’, get used to it! It’s a buzzword you’ll hear relentlessly to talk about reducing emissions. Think of it as the amount of harmful greenhouse gases that are given off into the environment by a single person, organisation, or product.
So going back to the Gherkin Building - perhaps the most obvious as well as the most significant eco-friendly feature is the glass windows, which allow light to pass through the building, both reducing heating costs and brightening up the workspace.
The ingenuity behind the various eco-friendly aspects of the Gherkin has seen its fair share of publicity both from serious and silly sources.
In a recent April Fool’s Day edition, one e-publication printed a story detailing plans to replace 50% of the current exterior with grass, which would not only make large steps in the name of sustainability, but also give the building the green hue that would truly earn it the nickname of the Gherkin.
The only drawback is as you may have guessed, that this story was an April Fool’s Day joke and completely made up.
In all seriousness though, the building is setting a new standard of design that other architects and city planners just cannot ignore. The building’s bold and cost-efficient design has won a number of architectural awards, including the Stirling Prize, the London Region Award, and the Emporis Skyscraper Award among others.
The design comfortably accommodates a large number of offices while keeping maintenance and operational costs down, striking a superb balance between nature and the workplace.
Nature is well and good, as long as the weather is nice outside. Given London’s notoriously bad weather, the architects knew they must devise a quality temperature regulation system, and that they did.
A special system designed to reduce the building’s reliance on air-conditioning was devised that cuts consumption in half compared to standard office buildings.
There are atria that link each floor vertically to one another, forming spiraling spaces up the entire building. They serve not just as social common spaces but also act as the building’s lungs, distributing clean air from the opening panels in the facade through the entire building.
The building isn’t all business though - it has its fair share of fun as well. At the very top, a clubroom offers a picturesque entertainment spot for company functions, private parties, etc., with a breathtaking panoramic view of the city.
The creation of such an innovative structure has many wondering what the future of urban planning and architecture may be. Well, if the other projects currently commissioned by Foster and Partners are any indication, the entire city constructed with similarly eco-friendly buildings is not far in the distance.
The Masdar City development aims to create a desert city that produces zero waste and removes as much carbon dioxide from the atmosphere as it puts in - a huge feat in protecting our earth.
The Gherkin is a truly impressive feat, yet it is not the only one worth noting. Now to move on to another green initiative, I’ll tell you about the Eden Foundation Building, found in Cornwall…

﻿ Nghe thấy "commissioned by the law offices of Foster and Partners"