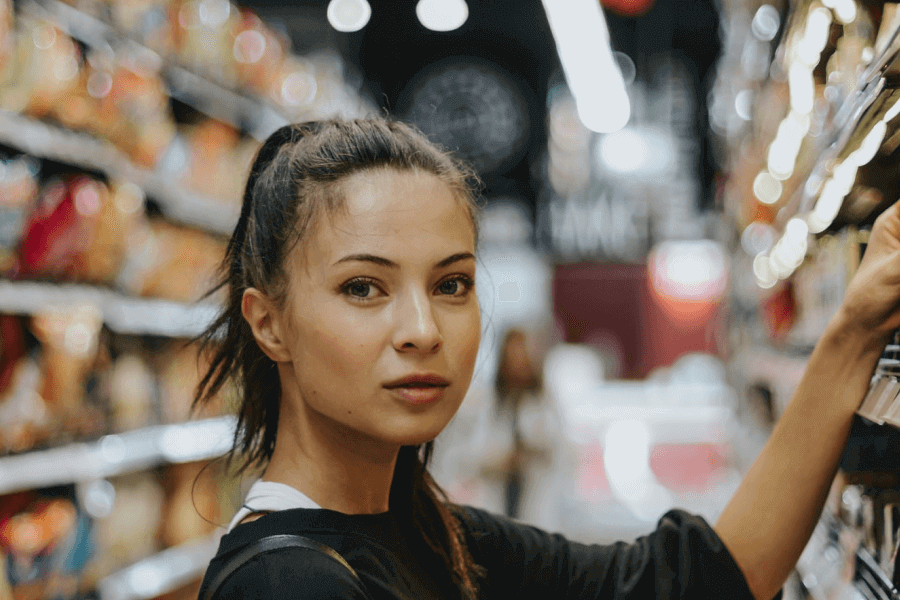 Question 1 - 4
Complete the flow chart below.
Write ONE WORD for each answer
Research methodology
STEP 01
Stage 1
Discussion with supermarket department manager to decide on the store’s
1
﻿ for the website
STEP 02
Decision to investigate website use as a
2
﻿ way for customers to communicate problems
STEP 03
Stage 2
Design of questionnaire to identify customers’ experiences and
3
﻿ to problems
STEP 04
Data collected from
4
﻿ with customers in four branches of the supermarket
STEP 05
Analysis of responses
Question 5 - 10
Choose the correct letter, A, B or C
5
Which pie chart shows the percentage of respondents who experienced a problem in the supermarket? 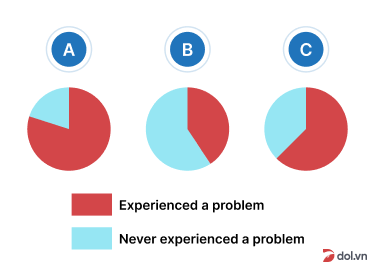 A
Chart A
B
Chart B
C
Chart C
6
Which pie chart shows the reasons why customers failed to report the problem directly to supermarket staff? 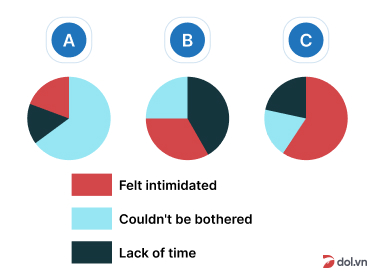 A
Chart A
B
Chart B
C
Chart C
7
How might the student's website help the supermarket, according to the manager?
A
It would support the expansion of the company.
B
It would allow the identification of problem areas.
C
It would make the company appear more professional
8
The student says one problem is that some customers
A
do not have computer skills.
B
do not have their own computer.
C
do not have access to a computer.
9
Further observation of website use is necessary because of
A
the small size of the sample.
B
the need to evaluate the objectives.
C
the unrepresentative nature of the respondents.
10
One positive result of the website for the supermarket staff could be
A
greater support from management.
B
less chance of unfair complaints.
C
greater cooperation between staff.

For my website design project, I decided lo approach Supersave supermarkets, because I have an evening job at the supermarket, so I already have a slight insight into their organisational goals and workings.
The field research for my project was in two stages.
First, I had an interview with Mr Dunne, who is in charge of Supersave's customer care department. I discussed the project with him in order to identify the supermarket's requirements.
Mr Dunne said customers are often unwilling to make a face-to-face complaint when they've experienced difficulties with a product, or a member of staff, or anything related to the supermarket.
So he said a website which allowed members of the public to get in touch with the organisation and bring the problem to their attention in a private manner might be very useful, and we agreed that I’d work on this.
For the second stage of my research, I devised a questionnaire to put to Supersave customers. I needed to find out about the customers' experiences of problems, together with their attitudes towards making complaints, both directly and indirectly.
I used a mixture of closed questions such as 'Have you ever experienced a problem at any Supersave store?' and open questions such as 'What would you find helpful about a customer complaint website?’
I decided to do interviews rather than rely on distribution of the questionnaire, as I felt this was likely to lead to a higher take-up rate. I visited four Supersave stores, two in the city centre and two in the outskirts and altogether I interviewed 101 respondents. Then finally, I analysed the results.
I found the results of the questionnaires to be very informative. I found that out of the total number of customers investigated, 64 percent had at some stage encountered a problem in a Supersave Store.
Out of these people, the vast majority said that they hadn’t reported the problem to any member of staff they’d just kept it to themselves. The next thing I tried to find out was why they hadn't complained.
Well, about 25 percent of the people I interviewed said the reason was that they couldn't be bothered, and a slightly smaller percentage said they didn't have enough time, but 55 percent said the reason was that they felt intimidated.
I finally asked if they would be more likely to complain if they didn't have to do it face-to-face, and nearly everyone I asked said that they would - 95 percent, to be exact.
I then set about designing the website to meet these needs. Once l'd completed the website, I made another appointment with Mr Dunne, to find out what he thought of it.
Mr Dunne said he felt that the pages would benefit his organisation by giving customers a new way of expressing their complaints, and by making it easier to collect complaints, identify specific places where service and customer care were not as good as they should be, and act upon them accordingly.
Supersave is already a highly customer-orientated organisation and he thought our website would be an excellent addition to their customer care effort.
This is all well and good but there still remains the general problem with websites, that there's a lack of access to on-line computers. Surprisingly, in my survey I found that 88 percent of those interviewed had access to the Internet, which I felt was quite high.
But this access wasn't always direct for some people it was through their children and grandchildren and neighbours and so on, rather than being readily available in their own homes.
This could prove to be a major drawback to the site, but it is still better to have it now to yet the edge over competitors, however slight, and ii the very near future it is expected that almost everyone will have direct access to the Internet.
Another thing to consider is that at the moment I can only base our conclusions on data gathered from a tiny fraction of the supermarket's customer base.
In order to get a better idea of how the site is doing and to see how well l have met my objectives, the site will need to have been up and running for at least a few months.
After this time, I’ll be possible to see whether or not people are actually using the site, and if it’s helping to make improvements to their customer service.
It would also be interesting to study the effect of the site on staff at the supermarket. Morale could be dented, as more complaints come in. Staff may feel they are being unfairly criticised and that there is no need for another way for customers to complain.
But also, the site could boost morale by making staff come together to overcome the constructive criticism, and they may gain more job satisfaction by knowing that they are making a difference to the customer.
So, overall, l feel my website has met my objectives, but there is scope for improvement and expansion. Are there any questions?

=> Biết đáp án sắp tới khi nghe "First, I had an interview with Mr Dunne, who is in charge of Supersave's customer care department"

﻿ Tiếp tục nghe " I discussed the project with him in order to identify the supermarket's requirements. "