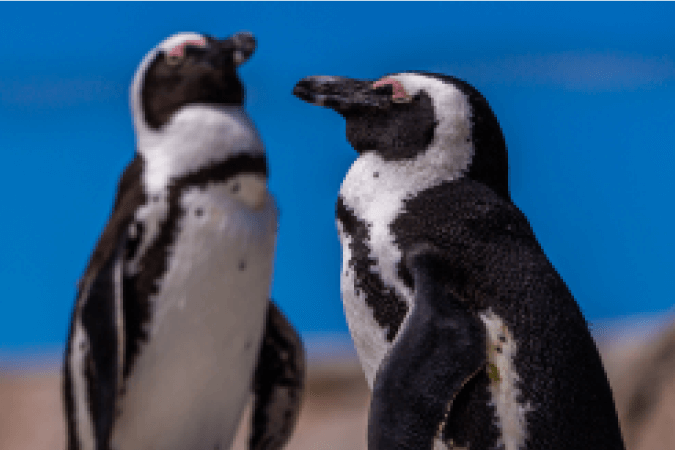 Question 1 - 10
Complete the notes below.
Write ONE WORD ONLY for each answer.
Penguins in Africa
Appearance and lifestyle
They are also called Jackass Penguins for the sound they make.
The
1
﻿ of their body remains constant.
They restrict their
2
﻿ on land from dusk till dawn.
They cannot fly because they have heavy
3
﻿.
They nest under
4
﻿.
They eat tree
5
﻿.
Predators
Threats
They lose
8
﻿ in winter.
They are fighting for nesting
9
﻿and food because of human activities.
In order to improve survivorship, it is helpful to increase the
10
﻿of their genes.

Good morning everyone. Today’s lecture is about a type of adorable animal— the penguin. When you think of penguins, you may picture them surrounded by snow and ice.
But not all penguins live where it’s cold—African penguins live in the southern tip of Africa. They are usually found within 40 kilometres of the shore and on a number of its surrounding islands.
African Penguins are also known as Jackass Penguins, because they make donkey- like braying sounds to communicate. African penguins can keep their body temperature at a stable level.
But their land habitat can get quite warm, so there are a number of ways for them to stay cool. They limit their daylight movements on breeding sites on land to early mornings and early evenings to avoid too much sun.
The pink glands above their eyes can help them cope with the temperate climates. Like other penguins, African penguins spend most of the day feeding in the ocean, which also helps keep them cool.
Being a type of small to medium sized penguin species, African penguins average about 60 centimetres tall and weigh up to 3.6 kilograms. They have a black stripe and a pattern of unique black spots on their chest. Males are larger than females and have larger beaks.
Even though they are categorised as birds, African penguins aren’t able to fly because of their heavy bones. Their wings are more like flippers that make them particularly suited for life in the water. When they’re on land, their flippers and their tails help them keep their balance and walk upright.
African Penguins begin to breed at the average age of four. When a male and female pair up, they tend to breed together for the rest of their lives. Most other penguins nest and lay their eggs out in the open, but African penguins have a different approach.
They dig holes under bushes out of their own excrement, called guano, so they are sheltered from the sun and predators.
The African Penguin survives on a diet that is comprised mainly of marine organisms. They feed primarily on fish like sardines, along with the occasional squid and shellfish.
But when normal food is in short supply, they eat tree roots as well. The streamlined body of the African Penguin allows it to move through the water like a rocket, capable of reaching a speed of around 20 kilometres per hour when hunting for food.
The African Penguin’s smaller size means that it has many predators both in the water and also on dry land. Their natural predators at sea include seals and sharks.
The biggest threat to them on land is not just towards the adult penguins. The penguin chicks are sometimes taken by seagulls into the air and dropped from above. The seagulls could thus feed on them.
At risk from predators, young penguins are protected for about 40 days after hatching by both parents. They will leave the colony when they are between 3 to 5 months old and will return a few years later.
The entire surface of their body is densely covered with feathers, which fall off during the winter. This process is called molting and takes about three weeks to complete. During that time, they are unable to forage.
Therefore prior to this, African penguins spend about five weeks laying down fat deposits. They generally live between 10 to 15 years, however many do not reach their full life span.
Their population has drastically declined. Approximately 120,000 African penguins remain in the wild, and their population has decreased by 90% in the past 60 years. They are considered to be vulnerable and have been listed as being endangered. Two major factors have contributed to their decline.
They are struggling for nesting space due to human disruption and competing for food due to overfishing and pollution. With the limited number of breeding pairs, survivorship becomes difficult for African penguins.
This makes them especially vulnerable as environmental conditions change or an outbreak of a disease occurs. For instance, avian malaria has caused 27% of the captive-breeding penguins’ deaths annually. The more genetic diversity there is within a species, the high the likelihood that at least some of the individuals will adapt and survive.