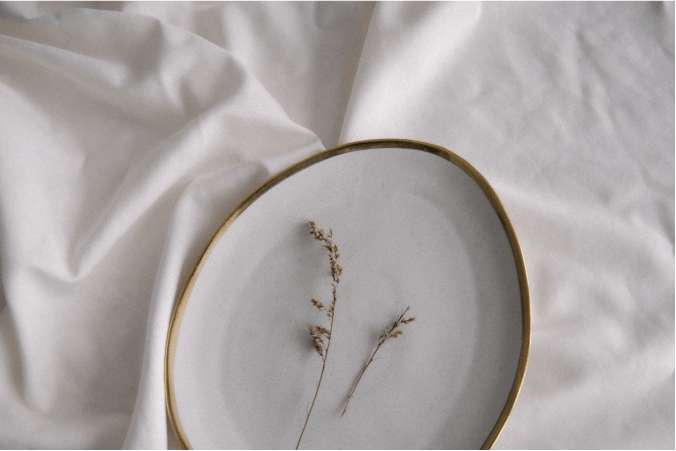 Question 1 - 10
Complete the sentences below. Write NO MORE THAN TWO WORDS AND/OR A NUMBER for each answer.
1
Ceramics date back approximately
﻿
﻿
2
The first figurines were made in the area of
…
﻿
3
Early humans could not use their pots to store
…
﻿
4
The Chinese improved the quality of ceramics by mixing
…
with the clay.
5
Chinese porcelain was also called
…
﻿
6
Bottger added quartz and
…
to clay to make porcelain.
7
Glass production is similar to clay ceramics apart from the rate of
…
﻿
8
The Romans introduced the use of glass to make
…
﻿
9
The discovery of concrete is probably due to observing reactions of water and
﻿
﻿
10
The ability to build large
…
contributed to the success of the Roman Empire.

Hi everyone - today I’m going to be talking about the origins of ceramics. So, first of all. Let’s start off with - what is a ceramic? Well, generally speaking. Ceramics are what you get when you apply heat to certain inorganic, non-metallic solids and then allow them to cool.
And examples of ceramics are everyday things like earthenware pots, crockery, glassware, and even concrete.
So how did it all begin? Well it all started around 29.000 years ago when humans discovered that if you dig up some soft clay from the ground, mould it into a shape and then heat it up to a very high temperature, when it cools the clay has been transformed into something hard and rigid.
And so - what did those first humans do with their discovery? Well - they created figurines which were small statues and which depicted animals or gods or any shape that the day could be moulded into
And all this activity was centred around southern Europe where there is also evidence of ceramics that were created much later.
The early humans also found a practical use for their discovery, such as storing things like grain - although there were drawbacks. The pots were porous so that, although they could carry water in them, it wasn't possible to store it over a long period. And also, they were quite brittle and shattered very easily if they were dropped.
But despite these problems, it was many thousands of years before there were any improvements. In China at around 200 BC they discovered that by adding minerals to the clay they could improve both the appearance and the strength of the ceramics.
But it took nearly a thousand years before they perfected the process to produce high-quality ceramics known as porcelain. And once they had perfected the process they kept it a secret - for another thousand years!
Compared to the first ceramics, porcelain was lighter. finer, harder and whiter and became an important commodity in China's trading with the rest of the world for hundreds of years.
In fact, it became so valuable that it was known as white gold and spies were sent to China to discover what they did to the clay to produce such high-quality merchandise. It wasn't until the eighteenth century that the secret began to unravel.
A German alchemist called Johann Friedrich Bottger was asked by the king to make gold out of lead. Unfortunately, Bottger failed to achieve this and soon gave up, but in order to please the king he attempted to make high-quality porcelain.
And after many years of experimentation, he discovered that by adding quartz and a material called china stone to very high-quality clay he managed to get the same results that the Chinese had been achieving for the last 1,000 years.
We now look at another ceramic which is made from mixing sand with minerals and heating to over 600 degrees Celsius. When this mixture cools the result is of course glass.
The main difference between ceramics made from clay and glass is that clay is made up of crystalline plates which become locked together in the cooling process whereas glass cools too quickly for crystals to form.
Apart from that, the process of heating up naturally occuring materials to transform them is the same.
The origins of glass date back to 3500 BC but it wasn't until the Roman Empire, 2,000 years ago, that the art of glass-blowing and the practical uses of glass became more widespread.
One of the more innovative uses was to use it in windows as, up until then, they had just been holes in walls. It must have been very draughty in those days!
The Romans were also responsible for inventing concrete. And although the origins are uncertain, experts think that this is largely due to the high level of volcanic activity in the area.
The Romans observed that, when volcanic ash mixes with water and then cools, it gets extremely hard and almost impossible to break up. The chemical reaction that follows is very complex and continues for many years, and the concrete just keeps getting harder.
Evidence of this is the numerous Roman remains that are still standing, many of which are almost completely intact.
One of the most important facts about concrete for the Romans was that it can be created underwater. As the Roman Empire grew, the Romans needed to take control of the seas and for this they needed to build harbours capable of holding a fleet of ships.
Pouring concrete mixture into the sea immediately started the hardening process and rather than just dissolving in the mass of water, the substance was tough and long-lasting. This strange characteristic of concrete made a significant contribution to the success of the Roman Empire.